Worldwide, nations are going to have to slash their greenhouse gas emissions drastically to prevent average global temperatures from warming beyond the point of no return, which many scientists consider to be 2°C warmer than average temperatures just before the industrial age.

In fact, the International Energy Agency in a new report says “radical action” is needed to transform how we produce and consume energy in order to prevent the worst of global warming.

The IEA has created a fascinating interactive graphic to help people visualize how radically carbon dioxide emissions might need to be reduced by 2050 to prevent certain degrees of global warming, and how the world’s energy supply system may need to evolve over the decades to help make that happen. The graphic doesn’t address how methane emissions, which recent studies have shown could be a growing part of oil and natural gas production, could play a role in global warming by 2050.

Already, the U.N. Intergovernmental Panel on Climate Change concluded last year that the world is currently on track to emit enough greenhouse gas emission to exceed 2°C of global warming by 2040. Beyond that threshold, the risks of “dangerous” ramifications of climate change escalate.

It’s an extremely complicated three-part graphic, so let’s focus on the IEA’s thoughts on CO2 emissions reductions. Based on the new IEA report, Energy Technology Perspectives 2014, the graphic shows that the electric power sector is the globe’s largest emitter of greenhouse gas emissions. That means that advances in renewables, carbon capture and storage technology and energy efficiency can make the biggest differences in reducing greenhouse gas emissions.

The graphic lays out three different 2050 global warming scenarios: 2°C warming, 4°C warming and 6°C warming. According to the IEA, the 6°C scenario is what could happen if current energy consumption trends continue without any efforts to reduce global greenhouse gas concentrations. The 4°C scenario reflects some countries’ pledges to improve energy efficiency. The 2°C scenario shows what happens when the most drastic steps to slash CO2 emissions are taken worldwide by transforming how humans produce and consume energy. 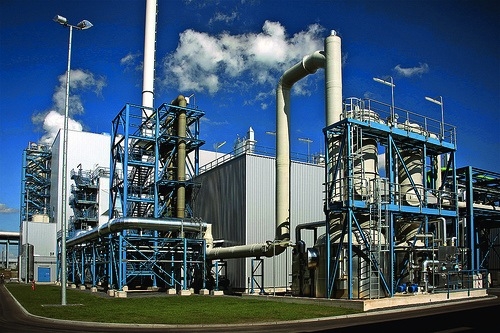 A carbon capture and storage plant in Germany.
Credit: Vattenfall/flickr

By doing nothing at all and letting current energy consumption trends continue, the IEA projects that worldwide CO2 emissions will reach 55 gigatons by 2050, up from 31 gigatons in 2010 and a projected 36 gigatons in 2015. If the most drastic emissions reductions measures were taken to cap global warming to 2°C by 2050, global CO2 emissions are projected to be only 15 gigatons that year.

The graphic shows that energy efficiency measures alone can make the biggest difference in reducing carbon, possibly contributing 38 percent of total global CO2 emissions reductions by 2050. The 55 gigatons of total emissions in the 6°C warming scenario could be reduced to 39 gigatons by 2050 by taking only energy efficiency measures. Include carbon capture and widespread use of renewables, and emissions are reduced to 21 gigatons by 2050, allowing the globe to come very close to only 2°C warming in 2050.

Carbon capture and storage projects are critical to future emissions reductions because even in a 2°C warming scenario, fossil fuel use will likely remain significant, requiring the storage of the CO2 emitted from burning those fossil fuels in order to keep global warming in check.