Icebergs Are Swarming Shipping Lanes in the Arctic

It’s with that threat in mind that shipping companies are now avoiding parts of the North Atlantic, where an unusually large swarm of icebergs is making life miserable for captains on the high seas. 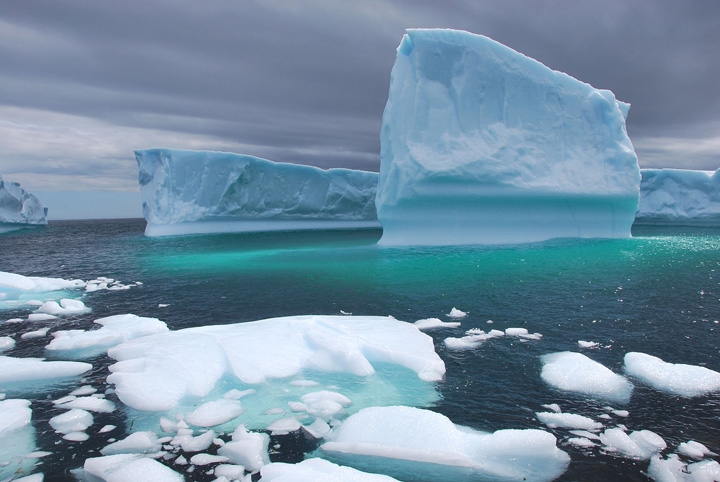 An iceberg off the coast of Newfoundland.
Credit: Wikimedia Commons

Around 450 icebergs — defined as hunks of ice covering at least 5,382 square feet and between 98-164 feet in thickness — are lurking off the coast of Newfoundland and Labrador, well above the average of 80 usually found for this time of year. The swarm appeared suddenly, too. Just last week, there were only 37 icebergs in the region.

The highest concentration of rogue ice is off the southeast tip of Newfoundland. The Titanic sunk after striking an iceberg just to the south of that area, so dangerous ice isn’t exactly abnormal for the region.

The early start to iceberg season is, however. According to the Associated Press, the number of icebergs currently in the water is more in line with what the Coast Guard expects to see in May or June. As a result, ships are having to slow down or travel hundreds of miles out of their way to avoid suffering the same fate as the Titanic.

The wild start to iceberg season fits with a pattern of rapid Arctic change that could alter access to the region. The sea ice minimum, usually hit in September, has decreased by more than 13 percent a decade since the late 1970s. That’s largely driven by the warm air and water invading the region due to climate change.

That’s been a boon to the shipping industry, allowing boats to go through the Northwest Passage. Just last August, a luxury cruise navigated the passage.

The region just had its third year in a row of record low winter sea ice and repeated bouts of warm air helping melt out ice. Warm ocean waters are also responsible for making the eastern Arctic Ocean more like the Atlantic. That could further shrink icepack, particularly in summer, allowing for easy navigation.

But whether wild swarms of icebergs will indiscriminately terrorize the high seas is still up for debate. Icebergs in the North Atlantic typically come from calving events off of Greenland’s glaciers, which are quickly melting due to rising temperatures.

While it’s plausible rising temperatures will cause more calving and thus more icebergs, it’s also possible ice could just plain melt, according to Alan Condron, a climate modeler at the University of Massachusetts, Amherst, who has studied the region’s shifting ice.

“There is some evidence that while Greenland has been melting faster in recent years, the number of icebergs being formed each year has stayed the same and it’s the fraction of liquid melt that has increased,” he said, noting that there’s only about a decade of data on the topic, though.

Of course more melt may spare mariners in the North Atlantic, but regardless, the hastening melt of Greenland is bad news for the ports many call home. That melt contributes to sea level rise and it could inundate coastal cities, costing them trillions in adaptation expenses by the end of the century. In other words, iceberg swarms will be the least of their problems.

You May Also Like:
Parts of the Arctic Ocean are Turning Into the Atlantic
Congress’ ‘Political Theater’ Threatens Science, Climate
Zaria Forman Finds Beauty in the Things We’re Losing
The Climate Could Hit a State Unseen in 50 Million Years