Half of World Could See Deadly Heat Waves By 2100

Even with drastic cuts to the emissions of greenhouse gases that are driving up Earth’s temperature, more than half of the world’s population could be exposed to deadly heat waves by century’s end. 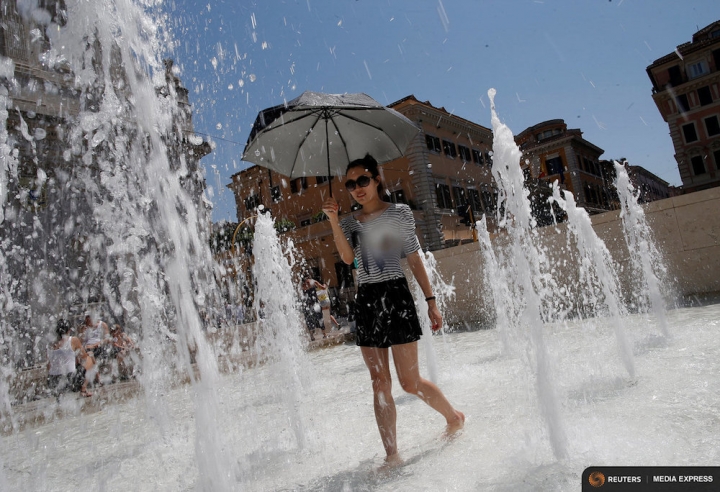 A tourist cools down at a fountain on a hot summer day in downtown Rome.
Credit: REUTERS

If emissions continue on their current path, that proportion will jump to three-quarters of the world’s residents, due to both rising temperatures and humidity, a new study detailed Monday in the journal Nature Climate Change, finds.

That future is what study author Camilo Mora calls a choice between “bad and terrible,” but crucially, it is still a choice. If the world reduces emissions, it can reduce the impacts of warming as much as possible.

Societies will also have to adapt to rising temperatures and the higher risks to human health they bring, but it is the developing countries that are least able to adapt that are likely to be hit the hardest.

“The projections of future risk to human health are sobering,” Michael Wehner, a senior staff scientist at Lawrence Berkeley National Laboratory who wasn’t involved in the study, said in an email, citing the particular risk to developing nations. “I welcome this paper for highlighting this inequity and for its novel demonstration that changes in the combination of heat and humidity are critical to understanding the effect of global warming on human health.”

A shift to more, and more extreme, heat is one of the clearest outcomes of global warming: as overall temperatures rise, extreme heat becomes more likely, and extreme cold less likely. Several studies have shown that warming is already influencing such heat waves.

Mora, a climate scientist at the University of Hawaii at Mona, and his colleagues wanted to see how various greenhouse gas emissions scenarios would affect the future occurrence of deadly heat waves, but found there wasn’t a good sense of how common they are now or over what threshold heat waves became deadly.

They pored over 30,000 studies and found nearly 800 cases of deadly heat events reported in 164 cities across 36 countries since 1980. “That was kind of exciting and scary at the same time to find so many of them,” Mora said.

From those historical events, the team found that the thresholds for deadly events varied from place to place based on the combination of temperature and humidity levels. Heat waves could lead to excess deaths at lower temperatures when humidity was sky high, as was the case during a 2010 Moscow heat event that killed thousands.

How the number of days of deadly heat will change under different scenarios of greenhouse gas emissions.
Credit: Mora, et al./Nature Climate Change

Humidity exacerbates the effects of high temperatures because it shuts down the body’s natural cooling system, preventing the evaporation of sweat.

Using historic data, the team found that 30 percent of the world’s population sees at least 20 days each year that surpass the temperature and humidity thresholds for a deadly event at a given location.

Under even the most stringent cuts to emissions — cuts that are virtually unfeasible at present — that proportion would increase to half by 2100. If emissions aren’t curtailed at all and continue to increase, 75 percent would be under threat.

In particular, New York City would see 50 days over the threshold considered deadly, while Los Angeles would see 30, and Orlando and Houston would be above those conditions for the entire summer under the latter scenario. The increase in deadly heat days for various cities can be seen in an interactive map the researchers put together.

Mora called the results “mind blowing” and said they underscore the need for global action to curtail emissions of carbon dioxide, the main greenhouse gas. Such action is under threat with President Trump’s announcement this month that he will pull the U.S. out of the landmark Paris accord, though some cities and states are looking to fill the gap left by the federal government.

Mora said that even though deadly heat events will rise under more moderate warming, the need for action was akin jumping from a building. “You either jump from the 4th floor or you jump from the 8th floor,” he said.

The biggest increases in potentially deadly heat were found, somewhat surprisingly, in the tropics, where many developing countries are. While this region won’t see the biggest increase in temperature, conditions are already so hot and humid that a small rise can tip them over the edge.

Of course, just because more heat events will surpass the deadly threshold, they won’t necessarily cause excess deaths, as society can adapt to hotter conditions. This is more likely to occur in developed countries, which have an edge because of more widespread access to air conditioning, clean water and quality health care.

Developing countries, though, often lack the resources to fund adaptation efforts. Some such countries are looking for ways to reduce deaths and illness associated with extreme heat, though; several cities in India are instituting heat health action plans to better warn residents of the risks of heat waves and have shown success in reducing deaths.

Mora hopes this study and others like it will show policymakers that they need to take action to curb warming, and the sooner the better. The best way to deal with the rise in deadly heat “is to prevent it from happening,” he said. “Let’s try not to let the lion out of the cage.”

You May Also Like:
Scientists Saw a Nearly Unheard of Antarctic Meltdown
Sharp Uptick in Wildfires Strains Great Plains Agencies
It’s June. California Is Still Covered in Snow
May Continues a Ridiculous Warm Streak for the Planet