Google will convert an old coal-fired power plant in rural Alabama into a data center powered by renewable power, expanding the company’s move into the energy world.

The technology giant said on Wednesday that it would open its 14th data center inside the grounds of the old coal plant, and had reached a deal with the Tennessee Valley Authority, the region’s power company, to supply the project with renewable sources of electricity. With the coal plant rehab, Google solidifies a reputation among tech companies for promoting clean energy. 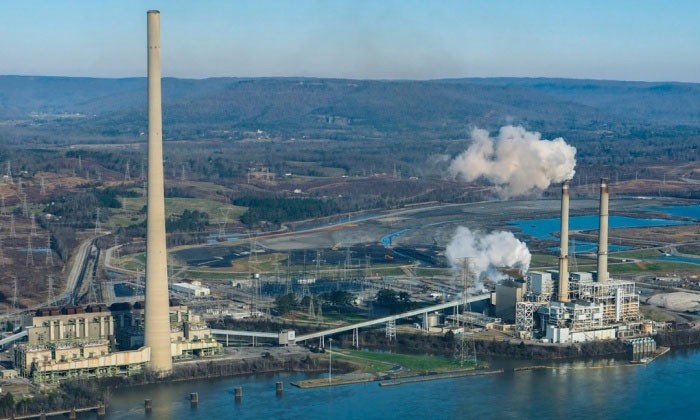 Google is building a data center on the grounds of the Widows Creek coal power plant in Jackson County, which has been scheduled for shutdown.
Credit: Google/The Guardian

“It’s very important symbolism to take an old coal plant that is a relic of the old energy system and convert it into a data center that will be powered by renewable energy,” said David Pomerantz, climate and energy campaigner for Greenpeace.

Michael Terrell, who leads energy market strategy for Google’s infrastructure team, said the company saw clear benefits in taking over the old coal facility. “There is an enormous opportunity when you take over the infrastructure that is there – the transmissions lines and the water intakes – and use that to power a data center that is powered by renewable energy,” he said.

Outside utilities, Google claims to be the largest user of renewable energy in the U.S. The company says it uses 1.5 percent of wind power capacity in the U.S., and has plans to bring in more alternatives over the next year.

However, the company overall still treads with a relatively heavy carbon footprint compared to Apple.

About 46 percent of Google’s data centers are powered by renewable energy. Apple’s in contrast are powered 100 percent by clean energy, according to Greenpeace. Google is committed to going 100 percent renewable, but has no target date.

Google went into the renewable energy business earlier with data centers in Iowa and Oklahoma. However, the company still has three data centers in south-eastern states which rely heavily on coal and nuclear power, North Carolina, South Carolina, and Georgia.

Pomerantz said the move into Alabama was so encouraging because it challenged that dominance.

The company said it would be working directly with TVA to bring more wind power into the grid. “We see a lot of value in redeveloping big industrial sites like this. There is a lot of electric and other infrastructure that we can re-use,” Matt Kalman, a Google spokesman said in an email.

Google is also rehabbing old industrial facilities overseas. The company repurposed an old paper mill in Finland for use of a data center. It has already done a solar project in South Africa, and is scouting out other ways of producing clean energy cheaply.

The Alabama power plant has been generating power since 1952, but was slated to wind down later this year, in part because of incoming environmental regulations, the TVA said on its website.