By Tim Radford, The Guardian

The world’s glaciers are in retreat. The great tongues of ice high in the Himalayas, the Andes, the Alps and the Rockies are going back uphill at ever greater speeds, according to new research.

And this loss of ice is both accelerating and “historically unprecedented”, say scientists who report in the Journal of Glaciology.

In the past year or so, researchers have identified rapid rises in meltwater and alarming cases of glacial retreat in Greenland, West Antarctica, the Canadian and Alaskan coastal mountains, in Europe and in the Himalayan massif. They have also watched glaciers pick up speed downhill. One satellite-based study, confirmed by on-the-ground measurements, of the Jakobshavn glacier in Greenland, confirms that the river of ice is now moving at the rate of 46 meters a day, 17 kilometers a year, which is twice the speed recorded in 2003, which in turn was twice as fast as measured in 1997. 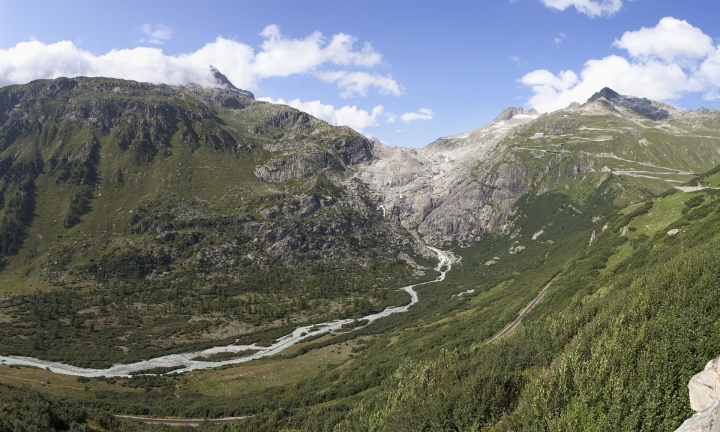 The Rhone glacier, Switzerland. Sea levels are rising as a consequence of the rapid loss of glacial ice worldwide.
Credit: REX Shutterstock/Guardian

The World Glacier Monitoring Service, based at the University of Zurich in Switzerland and with partners in 30 countries, has been compiling data on changes in glaciers over the last 120 years. And it has just compared all known 21st century observations with data from site measurements, aerial photography and satellite observations and evidence from pictorial and written sources. Altogether, the service has collected 5,000 measurements of glacier volume and changes in mass since 1850, and 42,000 records of variations in glacier fronts from records dating back to the 16th century.

And the evidence is clear: the glaciers are in retreat, worldwide, and the retreat is accelerating.

“The observed glaciers currently lose between half a meter and one meter of ice thickness every year – this is two to three times more than the corresponding average of the 20th century,” says the study’s lead author, Michael Zemp, who directs the monitoring service. “Exact measurements of this ice loss are reported from a few hundred glaciers only. However, these results are qualitatively confirmed from field and satellite observations for tens of thousands of glaciers around the world.”

The great ice sheets help maintain the climate zone differences that drive weather patterns. They provide distinct ecosystems that support precisely adapted lifeforms, from mountain wildflowers to snow leopards. They offer a source of tourist income for mountain communities and deliver spring and summer meltwater to irrigate crops in the fertile valleys downstream. And as long as ice is safely stored in mountain ranges, it isn’t contributing to sea level rise.

But sea levels are creeping up inexorably every year, as a consequence of galloping glacial retreat in the polar, temperate and tropical zones.

This loss of ice is not uniform: researchers recorded cases of glacier advance, sometimes of a few hundred meters, in the 1990s. But these intermittent glacial gains are nothing like the return of the ice recorded during the so-called “little Ice Age” that began in the 16th century, when the Thames froze hard enough to support annual winter fairs. The big picture is one of retreat, everywhere.

Some glaciers may now be doomed. In the last century, because of fossil fuel emissions of greenhouse gases into the atmosphere, global average temperatures have crept up by almost 1°C to trigger wide-scale melting. Even were the world to abandon fossil fuel use right now, some melting would continue. “Glaciers in many regions will very likely suffer further ice loss, even if climate remains stable,” the researchers conclude.