Federal funds that help communities brace for emergencies will stop being provided to states if they ignore threats posed by climate change in their disaster planning. 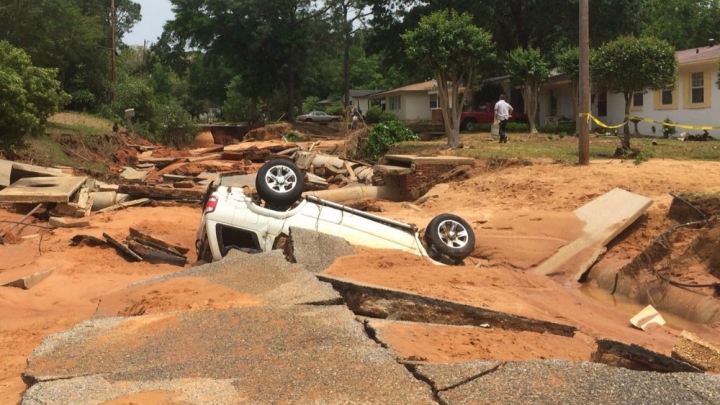 States publish reports every five years or so detailing their vulnerability to natural disasters, such as floods, storms and wildfires, and how they plan to protect themselves and recover after them. Such plans are needed in order to qualify for a share of nearly $1 billion in Hazard Mitigation Assistance grants provided every year by the Federal Emergency Management Agency.

But those plans rarely consider climate change impacts in detail — an omission that could see states become ineligible for the grants after new guidelines take effect early next year. Under FEMA’s updated guidelines, published last week, state disaster plans will only be approved if they adequately describe how the likelihood and intensity of natural hazards could be affected by growing levels of greenhouse gas pollution.

“The risk assessment must provide a summary of the probability of future hazard events,” the new guidelines state. “Probability must include considerations of changing future conditions, including the effects of long-term changes in weather patterns and climate.”

Some states, including California and Connecticut, already consider climate change in their plans, albeit imperfectly, said Rebecca Hammer, a Natural Resources Defense Council attorney who has been pressuring FEMA to make such a change for several years. But she said there are “a lot” of states that fail to adequately consider climate change in their disaster planning, including Florida, Texas, and “a lot of the states in the middle of the country.”

FEMA’s changes were welcomed by Adam Sobel, director of Columbia University’s Initiative on Extreme Weather and Climate, though he said the agency could have gone much further.

“It’s good that they’re doing this,” Sobel said. “FEMA has lot of power — they’re the federal agency that has the most direct mandate for this kind of stuff, and they haven’t included climate change that much in the way they require state and local governments and the federal government to plan and prepare.”

The move is the agency’s latest step in its slow plod toward incorporating climate change science into its operations. It’s currently moving toward belatedly considering sea-level rise in its flood maps. But Sobel and Hammer both criticized the agency for not being more prescriptive in the new guidelines about how states should address climate change.

“They’re saying, ‘You have to account for climate change, but you have total freedom in how to do that,’” Sobel said. “It sounds like it’s a pretty lax standard.”

(FEMA officials declined to discuss the changes in an interview, instead providing information to Climate Central on background. That information did not directly address Sobel’s criticism.)

Despite Hammer’s criticism of Florida’s plan, it does discuss and consider some sea-level rise impacts, pointed out Aaron Gallaher, a spokesman for Florida’s emergency management division. He said that if FEMA requires more climate change analysis in the state’s next plan, which is due in 2018, then Florida would comply. “As far as FEMA is concerned, they’re a federal partner to us,” he said. “Whatever guidance they issue, we will follow those rules.”