Water scarcity half a world away caused by climate change could push up prices for meat and diary products in Europe by disrupting supplies of soybean, which is widely used as feed for livestock, researchers said Wednesday.

The European Union sources most soybean from outside the 28-nation bloc — mainly from Argentina, Brazil and the United States, according to an EU-funded study by Dutch-based NGO Water Footprint Network (WFN). 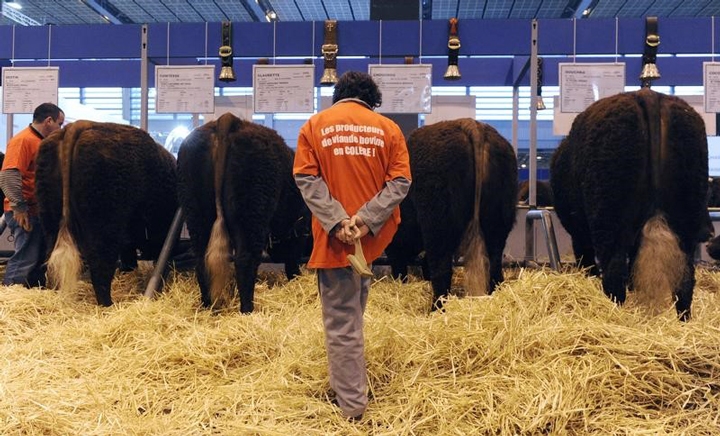 A beef producer stands in front of her cows during the International Agricultural Fair in Paris in this 2011 archive photo.
Credit: REUTERS/Gonzalo Fuentes

But 57 percent of soybean imports are from regions that are highly vulnerable to water scarcity, exposing Europe to possible shocks in supply, said Ertug Ercin, the study's co-author.

“The highest risk that the European meat and dairy sector will face due to climate change and weather extremes lies outside its borders,” he said in a statement.

About two thirds of the global population already live in areas experiencing water scarcity at least one month a year, according to the United Nations.

The problem is set to intensify with global warming, which is expected to affect rain patterns and cause more frequent droughts, the U.N. Food and Agriculture Organization (FAO) says.

Water in soybean farming areas could become insufficient leading to lower production and higher prices, which would push up costs of meat and dairy products in Europe, Ercin said.

Imports of other products like rice, sugar cane, cotton, almonds, pistachios and grapes could be similarly affected, according to the report.

“The EU's economy is dependent on the availability of water in other parts of the world for many crops,” said Christopher Briggs, WFN executive director. “That makes it vulnerable to increasing water scarcity and drought.”