The world has lost a third of its arable land due to erosion or pollution in the past 40 years, with potentially disastrous consequences as global demand for food soars, scientists have warned.

New research has calculated that nearly 33 percent of the world’s adequate or high-quality food-producing land has been lost at a rate that far outstrips the pace of natural processes to replace diminished soil. 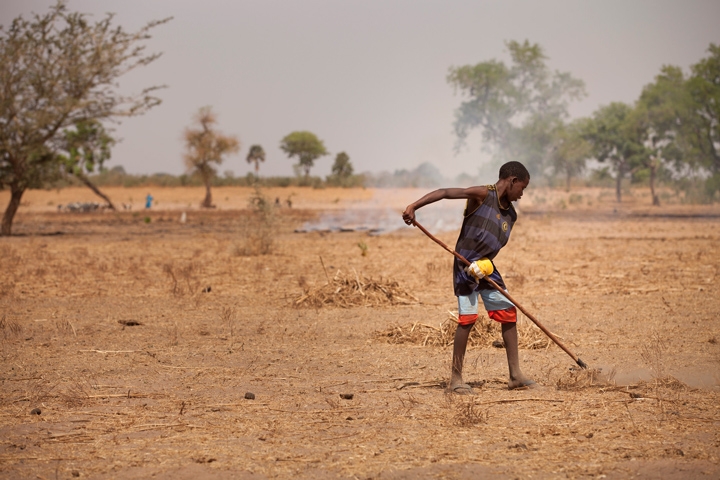 The University of Sheffield’s Grantham Centre for Sustainable Futures, which undertook the study by analysing various pieces of research published over the past decade, said the loss was “catastrophic” and the trend close to being irretrievable without major changes to agricultural practices.

The continual ploughing of fields, combined with heavy use of fertilizers, has degraded soils across the world, the research found, with erosion occurring at a pace of up to 100 times greater than the rate of soil formation. It takes around 500 years for just 2.5cm of topsoil to be created amid unimpeded ecological changes.

“You think of the dust bowl of the 1930s in North America and then you realize we are moving towards that situation if we don’t do something,” said Duncan Cameron, professor of plant and soil biology at the University of Sheffield.

“We are increasing the rate of loss and we are reducing soils to their bare mineral components,” he said. “We are creating soils that aren’t fit for anything except for holding a plant up. The soils are silting up river systems – if you look at the huge brown stain in the ocean where the Amazon deposits soil, you realise how much we are accelerating that process.

“We aren’t quite at the tipping point yet, but we need to do something about it. We are up against it if we are to reverse this decline.”

The erosion of soil has largely occurred due to the loss of structure by continual disturbance for crop planting and harvesting. If soil is repeatedly turned over, it is exposed to oxygen and its carbon is released into the atmosphere, causing it to fail to bind as effectively. This loss of integrity impacts soil’s ability to store water, which neutralizes its role as a buffer to floods and a fruitful base for plants.

Degraded soils are also vulnerable to being washed away by weather events fueled by global warming. Deforestation, which removes trees that help knit landscapes together, is also detrimental to soil health.

The steep decline in soil has occurred at a time when the world’s demand for food is rapidly increasing. It’s estimated the world will need to grow 50 percent more food by 2050 to feed an anticipated population of 9 billion people. According to the UN’s Food and Agriculture Organisation, the increase in food production will be most needed in developing countries.

The academics behind the University of Sheffield study propose a number of remedies to soil loss, including recycling nutrients from sewerage, using biotechnology to wean plants off their dependence upon fertilizers, and rotating crops with livestock areas to relieve pressure on arable land.

Around 30 percent of the world’s ice-free surfaces are used to keep chicken, cattle, pigs and other livestock, rather than to grow crops.

“We need a radical solution, which is to re-engineer our agricultural system,” Cameron said. “We need to take land out of production for a long time to allow soil carbon to rebuild and become stable. We already have lots of land – it’s being used for pasture by the meat and dairy industries. Rather than keep it separated, we need to bring it into rotation, so that that there is more land in the system and less is being used at any one time.”

Cameron said he accepted this would involve direct government intervention, funding for farmers and “brave” policymaking.

“We can’t blame the farmers in this. We need to provide the capitalization to help them rather than say, ‘Here’s a new policy, go and do it,’” he said. “We have the technology. We just need the political will to give us a fighting chance of solving this problem.”