Trump's order on Tuesday, keeping a campaign promise to bolster the U.S. coal industry, strikes at the heart of an international Paris Agreement in 2015 to curb world temperatures that hit record highs in 2016 for the third year in a row.

Many nations reacted to Trump's plan with dismay and defiance, saying a vast investment shift from fossil fuels to clean energy such as wind and solar power is underway with benefits ranging from less air pollution to more jobs.

“No matter how other countries' policies on climate change, as a responsible large developing country, China's resolve, aims and policy moves in dealing with climate change will not change,” he said. 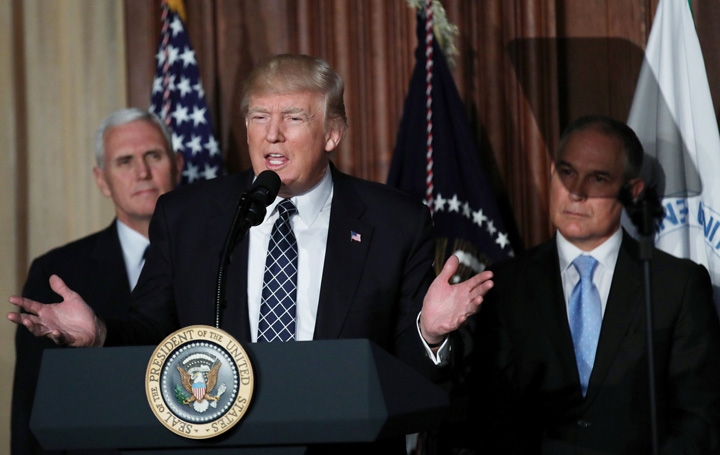 European Climate Commissioner Miguel Arias Canete said: “We see the Paris Agreement and the transition to a modern, more innovative economy as the growth engine of job creation, investment opportunities and economic prosperity.”

Trump's main target is Obama's Clean Power Plan, which required states to slash carbon emissions from power plants and was key to the U.S. pledge under Paris to cut emissions by between 26 and 28 percent below 2005 levels by 2025.

Trump did not say whether he would pull out of the Paris Agreement, agreed by almost 200 nations and which seeks a shift from fossil fuels this century as the cornerstone of efforts to limit heat waves, floods, droughts and rising sea levels.

The fear is that less action by the United States, the number two greenhouse gas emitter behind China, will cause other nations to roll back their own goals. The pact has been ratified so far by 141 nations ranging from Pacific island states to OPEC oil producers.

The Paris Agreement lets each country set domestic targets for restricting greenhouse gases and foresees no sanctions for non-compliance. Trump has sometimes called global warming a hoax but has also said he has an open mind about Paris.

Still, Trump's rowback is likely to undercut a core principle of the Paris Agreement that all national plans, due to be submitted every five years this century, have to be ever stronger and reflect the “highest possible ambition”.

German Environment Minister Barbara Hendricks warned Washington it could lose out. A shift into “reverse (gear) now will only hurt themselves in terms of international competitiveness,” she told the Sueddeutsche Zeitung daily.

Echoing that view, Danish Energy and Climate Minister Lars Lillehold said there had been “a significant momentum for the green transition” as green technologies have become cheaper.

In London, a spokesperson for the British Department for Business, Energy and Industrial Strategy reaffirmed Britain's commitment to tackling global climate change.

In many sectors, a shift from coal is underway.

A report by the U.S. Department of Energy in January said  43 percent of the workforce in electric power generation, or about 374,000 workers, were employed in the solar sector. Fossil fuels accounted for just 22 percent of jobs in the sector.

“All around the world, wind power and solar power is becoming so cheap that it will be favored over fossil fuels,” said Niklas Hoehne, of the NewClimate Institute in Germany.

In Paris, governments promised to limit a rise in average surface temperatures to “well below” two degrees Celsius (3.6 Fahrenheit) above pre-industrial times, ideally 1.5.

U.S. greenhouse gas emissions fell 11 percent from 2005-15. Bill Hare, head of the Climate Analytics think-tank, said they may remain at current levels by 2030 with Trump's policies.

Trump's policies could in turn nudge up the global rise in temperatures by about 0.1 degree Celsius (1.8 Fahrenheit) from a projected 2.8 degrees (5.0F) by 2100, based on existing government pledges for action, he said.