Fish species are shifting their ranges around the world in response to warming oceans, a trend that could have significant economic ramifications globally, a new study found.

The study, published Wednesday in the journal Nature, employs a novel index that creates a fish thermometer of sorts, teasing out evidence of population shifts from fishery catch records during the past four decades. The study is the first to detect climate change-related shifts in the range of fish species on a global scale. In doing so, it provides another line of evidence showing the far-reaching impacts of global warming. 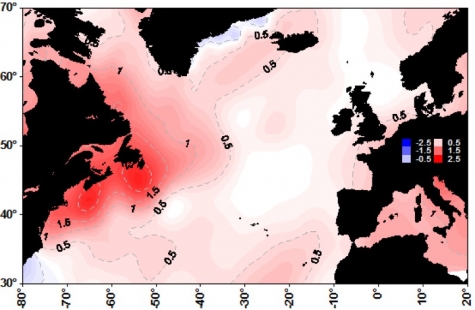 “We knew that oceans have warmed up in the last four decades, but we didn’t know how it’s affecting fisheries catch globally,” said study co-author William W.L. Cheung of the University of British Columbia in Vancouver in an interview.

Each cold-blooded fish species has a particular temperature range in which it thrives. If water temperatures depart from that range, they may experience reduced growth and reproduction, ultimately reducing their numbers in a particular area and changing the species' distribution.

Climate change-driven shifts in fisheries pose the biggest threat to livelihoods in developing countries, especially in the tropics, where adaptation capacity of both people and fish themselves are more limited, Cheung said. One adaptation measure that may need to be looked at is for fishery managers, such as the National Marine Fisheries Service in the U.S., to adjust fishing seasons and allowable catches based on observed population shifts.

With climate change predicted to accelerate in coming decades due to the rising amount of greenhouse gases in the atmosphere, even faster shifts in fish populations are possible, which could even lead to disputes between countries if commercially valuable fish shift out of one country’s waters and into another's, according to Boris Worm, a marine biologist at Dalhousie Univeristy in Nova Scotia who was not involved in the Nature study.

“This is an independent indication that climate change is real and has been real for a long time,” he said of the study. Worm cited recent shifts in cod, hake, lobster, and sardine populations off of Nova Scotia, with the southern end of species’ range dropping off as they move north.

By examining records of fisheries catches in 52 large marine ecosystems — from the hake caught off New England and northeastern Canada to the halibut haul off Alaska — researchers in Canada and at the University of Tasmania in Australia developed an index relating the annual fish catch of a species to its typical temperature preference. The index, known as the “mean temperature of the catch,” increased worldwide during the past four decades. 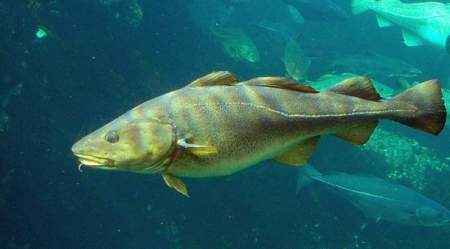 The Atlantic Cod is a species that has shifted its range northward during the past several decades.
Credit: Wikimedia Commons.

After accounting for the effects of fishing practices and large-scale oceanographic variability, Cheung and his colleagues found a statistically significant link between changes in the fisheries temperature index and increasing sea surface temperatures.

In tropical areas, there was an initial increase as subtropical species moved to cooler waters, but that increase leveled off since what were left are species that can only thrive in very warm water. Tropical fisheries are especially vulnerable to global warming, the study found, since species there tend to have a relatively narrow band of temperature tolerance and there is a limited supply of species that can move in to take their place and tolerate higher temperatures.

The study follows recent observations of an increase in warm-water species in several fisheries. During 2012, for example, water temperatures off the New England coast hit an all-time high, and shifts were observed in the distribution of Atlantic cod. A 2009 study found that about half of 36 fish stocks in the Northwest Atlantic Ocean were shifting northward over the past four decades, with some stocks exiting U.S. waters entirely.

On average, sea-surface temperatures are increasing by more than 1.8°F per decade, although there are regional variations, with some regions cooling due to changing ocean currents, and some warming four times faster than the global average, Cheung said.