By Emma Howard, The Guardian

Mosquitoes will appear in much greater numbers in the Arctic as it warms because of climate change, with negative consequences for caribou and the indigenous people who live off them, researchers warn.

The survival rates for Arctic mosquitoes will increase by more than 50 percent with a 2°C temperature rise in the region, says the study by Dartmouth College published on Tuesday. 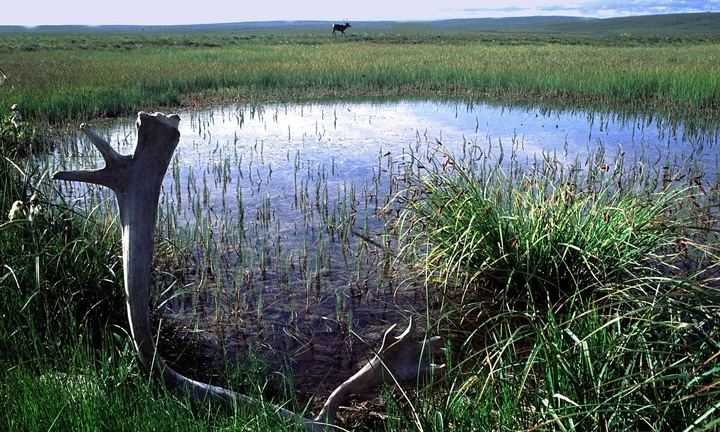 A caribou horn rests on the tundra of the Arctic National Wildlife Refuge in Anwar, Alaska, as a lone caribou grazes in the background.
Credit: Al Grillo/AP/The Guardian

Arctic temperatures are rising at twice the rate of the global average, which are likely to be 2.6-4.8°C higher by 2080-2100 than they are today if emissions go unchecked, according to the Intergovernmental Panel on Climate Change (IPCC).

Unlike mosquitoes in temperate regions, those in the Arctic do not carry malaria or other diseases known to be dangerous to humans.

Arctic mosquito eggs develop in ponds and hatch with the ice melt around May. The study reveals that warming temperatures cause the mosquitoes to hatch earlier and shortens their development time when they are vulnerable to predators such as diving beetles. This increases their chances of surviving until adulthood.

Lauren Culler, lead author of the study and postdoctoral researcher at Dartmouth’s Dickey Center Institute of Arctic Studies, said that the research could be used to predict how other ecosystems might respond to climate change.

“Temperature has such a strong effect on almost all biological systems. We don’t know as much about the Arctic as other ecosystems. But given the Arctic is changing so rapidly, having a baseline data set is going to be really important for anticipating future changes. We can learn a lot about ecological theories from studying these mosquitoes but we can also begin to anticipate impacts on human systems.”

Rising mosquito numbers will likely have serious consequences for caribou and reindeer herds, which are one of the main food resources for Arctic communities, the paper says.

Caribou, which are one of the few sources of blood for mosquitoes, are known to change their behaviour in response to harassment from the biting insects, by abandoning areas for more isolated ones such as snowy patches or windy ridges. This leaves them with less time and energy to spend on finding food.

Prof Pete Convey, a polar terrestrial ecologist at the British Antarctic Survey, told the Guardian the prediction is significant.

“It could be quite an important impact in terms of the amount of damage caused to a large mammal – one thing about the Arctic is there is a spectacular amount of biting flies there so they do have an impact on their prey. Although, until we have field data, you can’t prove that.”

The researchers collected samples from ponds in Western Greenland in 2011 and 2012 and conducted laboratory experiments to measure their development in different temperatures. From this, they created models to predict how they would be impacted across a range of future climate change scenarios.

The study predicts that the change could also have an impact on species that feed on the mosquitoes, such as Arctic and migratory birds. If the insects emerge long before chicks hatch, their growth could be inhibited by the drop in available food.

The study is published in the journal Proceedings of the Royal Society B: Biological Sciences.