As Seas Rise, Americans Use Nature to Fight Worsening Erosion

DESTIN, Fla. — The grassy yard behind Jennifer McPeak’s house was slipping into Marler Bayou, its edge giving way as waves beat against it. She planned to stem the losses with a $14,000 seawall until a Florida permitting official suggested an alternative — marsh seedlings and bags of oyster shells arranged to blossom into a “living shoreline.”

A few years later, crabs and snails crawl among the oysters and grasses in McPeak’s living shoreline, which occupies nearly the width of her shoreline. Fish school in it when the tide is up. The effects of years of erosion have been reversed; sand is being trapped in the yard when storms and floods hit instead of being washed away.

“We’re clawing back land here,” McPeak said, standing on sandy lawn near the end of a fence, where it used to hang over the water. “I’m loving rough water events now, because I think, ‘Hoo hoo hoo, free sand. So excited.’” 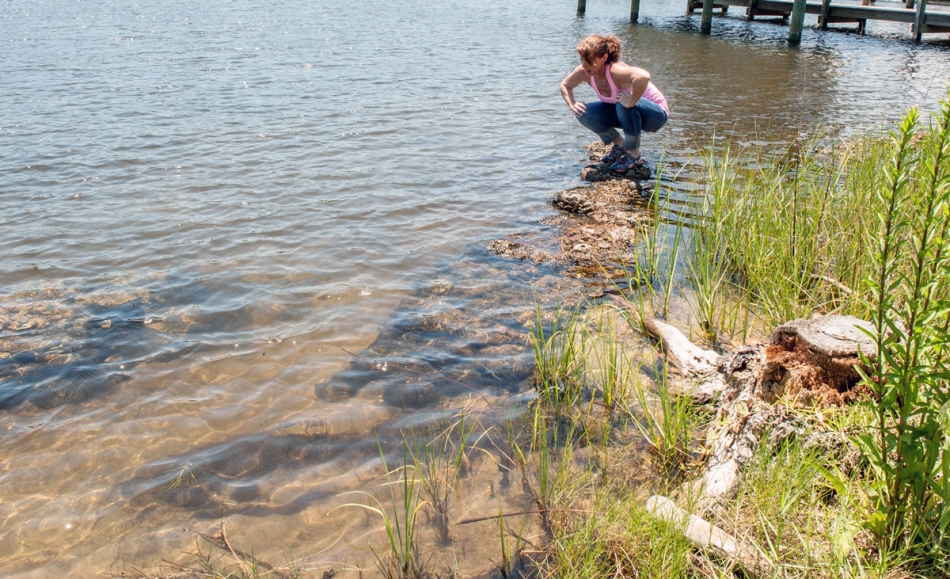 Destin resident Jennifer McPeak crouches on sacks of oyster shells used to build a living shoreline along the edge of her yard.
Credit: Mari Darr-Welch/Climate Central

Centuries of dredging, diking and development have replaced wetlands throughout the U.S. with more than 10,000 miles of rocks, concrete and metal. For every seven miles of coastline in the Lower 48, scientists in North Carolina calculated that about one mile is hardened with a seawall, bulkhead or other hard structure to protect land and property.

Rising costs from flooding and erosion are prompting Americans, military bases and government agencies to opt for more natural alternatives. State and federal governments are changing permitting rules and taking other steps to encourage the switch, which can improve water quality, support fisheries and protect against storms and rising seas.

Segment produced by PBS NewsHour in partnership with Climate Central.

After marsh grasses were planted to reduce erosion at the Needle Rush Point condominium community, which fronts both sides of Perdido Key in Pensacola, residents began seeing more wildlife.

“We’re planting needlerush and cordgrass to create a root barrier,” said Jeanette Pollett, manager of the Needle Rush Point Association. “With the grass, you get everything else. There’s more fish in the area, and the dolphins are entertaining.”

Since permitting rules on living shorelines were eased a little more than a year ago, 34 small living shorelines, typically under 500 feet, have been approved or built in Florida, according to U.S. Army Corps of Engineers figures, with the Destin area east of Pensacola emerging as a hotspot. That’s more than half of the 60 approvals issued nationwide during the same period; the rest were farther west on the Gulf Coast or north along the East Coast, including 13 in the Norfolk area.

Marler Bayou is more of a stubby inlet off Choctawhatchee Bay than a true bayou. It’s located in a residential part of Destin — a beach town that’s sleepy during winter and erupts with vacationers during warmer months. Tourists take fishing charter trips and party in bars, on beaches and aboard pontoon boats.

Seas have risen an inch and a half in the area since 2002, when McPeak and her husband bought their house on Marler Bayou. Higher water levels worsen erosion from waves, which are kicked up by boats and the wind. 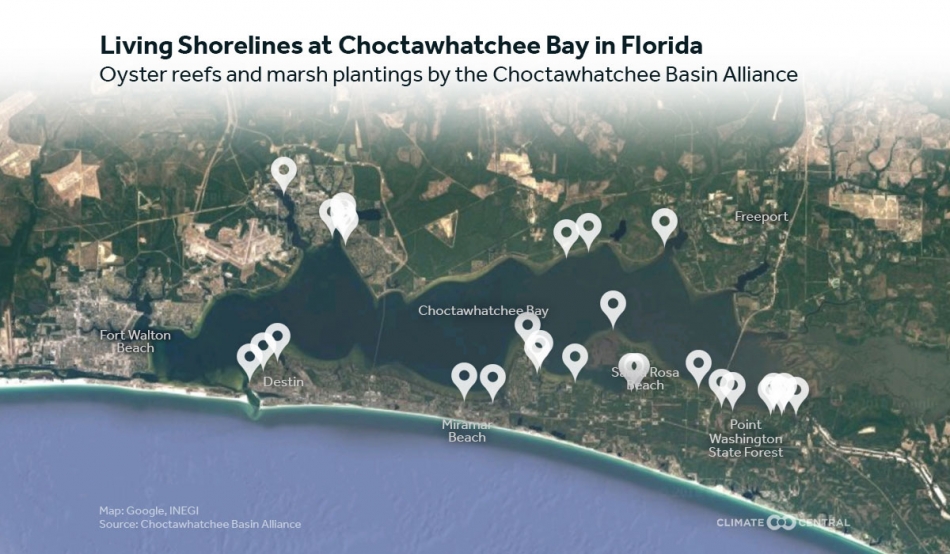 Seas are rising faster as heat-trapping pollution is released from fossil fuels, farming and forest losses. While governments worldwide are taking steps to slow warming and help communities adapt, elected leaders in Florida and the federal government have been dismissive of the problem.

As McPeak’s neighbors installed seawalls to protect their own yards, they made her problems worse. When waves pound against seawalls and bulkheads, wave energy can bounce back into neighboring properties. And it can cause erosion at the base of the infrastructure, which can lead to collapse.

Living shorelines are best suited for calmer waterways. They do less to keep floodwaters at bay, but they’re more likely to withstand serious flooding. When a storm surge overtops a seawall or bulkhead, it can scour the earth from behind the infrastructure and cause it to fall over.

Scientists combined insurance industry information, storm data and climate and development scenarios along the Gulf Coast, then assessed the cost-effectiveness of different types of approaches to reduce future damage from flooding. They reported in the journal PLOS ONE that nature-based shoreline protections could halve the costs associated with future flooding along the Gulf Coast, potentially saving tens of billions of dollars.

“Nature-based solutions” were found during the study to be “particularly cost effective,” said Borja Reguero, a coastal engineer at the Nature Conservancy and University of California, Santa Cruz who worked on it. “In terms of a pure benefit-to-cost ratio, they were ranking pretty high.”

Benefits can extend beyond property lines. Nitrogen pollution from lawns and farms that washes into waterways during storms, feeding harmful algae, can be reduced using oyster reefs and other shoreline ecosystems. Marsh growth can support fisheries and clean water, which support Florida’s economy. And coastal vegetation slows climate change by absorbing carbon more effectively in some cases than forests.

Still, seawalls and bulkheads remain more common and popular than natural alternatives. Research published in 2016 by two of Reguero’s colleagues showed that a tiny fraction of spending on coastal protections goes toward natural solutions.

While living shorelines have become popular “as an idea,” Webb said, “what we have not seen is this translate into widespread adoption at the homeowner level.”

Like two dozen other living shorelines in the Destin area, McPeak’s was built by the Choctawhatchee Basin Alliance. The group collects oyster shells from restaurants and uses state, federal and foundation grant money as well as volunteers to build living shorelines in public parks and for residents and Eglin Air Force Base.

“We want homeowners to see this as an alternative to seawalls,” said Alison McDowell, executive director of the group, which is a program of the Northwest Florida State College Foundation with five full-time staff. “We want to bring on people that can add that testimony.”

The rising popularity of living shorelines in Northwestern Florida is credited in part to a large restoration project in downtown Pensacola — Project GreenShores. The first phase, completed in 2003, involved the restoration of eight acres of salt marsh and seagrass and seven acres of oyster reef. One year later, it protected a section of roadway from the effects of Hurricane Ivan.

By being “visible and tangible,” Project GreenShores has inspired others to take similar approaches, said Darryl Boudreau, a watershed coordinator for the Nature Conservancy in Pensacola. 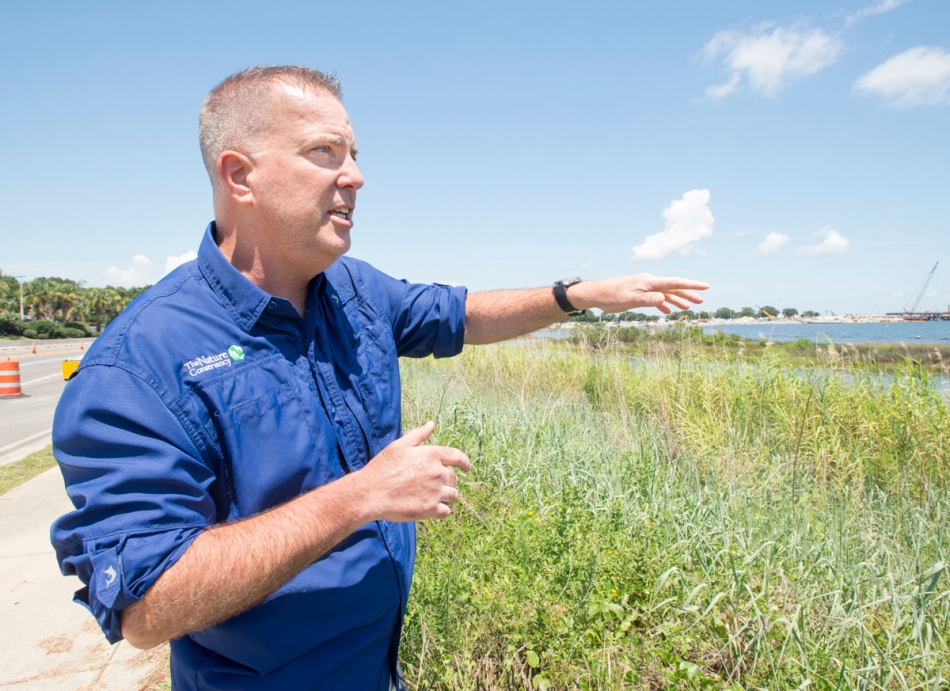 Few marine contractors build living shorelines for homeowners, though a growing number of businesses are working on public initiatives similar to Project GreenShores.

“We’re seeing an increase in the popularity of these projects,” said Matthew Trammell, an engineer who leads the Destin office of Taylor Engineering, a coastal engineering and environmental consulting firm. “Governments are trying to be the guinea pigs, if you will, and take the first step.”

Until a streamlined nationwide permit system for living shorelines was put in place last year by the U.S. Army Corps of Engineers, it could be more difficult to get the permit needed to build a living shoreline than to build a seawall. McPeak waited a year for her paperwork to be ready.

Florida and other states have also been easing permitting restrictions. Maryland in 2008 went further than any other state, when lawmakers approved rules that require living shorelines to be used as the “preferred method” to reduce erosion at homes.

“The permitting process is a significant part of the disincentives,” said Thomas Ankersen, a professor in the University of Florida’s environmental and land use law program. “The good news is there’s been a substantial effort on the part of the state to streamline what I call ‘small-scale’ living shorelines” — those like McPeak’s.

Still, for Butch Richard, who had a living shoreline built by the Choctawhatchee Basin Alliance this summer at his house across the bay from McPeak’s, waiting for the federal permit took nearly six months. Then he had to wait longer for it to be installed, with demand for living shorelines outstripping supply by the small nonprofit.

“The Corps had just started using the new nationwide permit for living shorelines right before the Richard permit was issued,” said Rachel Gwin, the restoration coordinator at the Choctawhatchee Basin Alliance, who handled the paperwork. “They’ve steadily been approving permits in around four to six months now, which is much quicker than originally but still a slower process.”

McPeak says the long wait for her permits ended up being worth it. With the money she saved on a seawall, she built a boathouse on her dock. And now she enjoys keeping track of the wildlife that visits her yard where the seawall would have been.

As McPeak spoke, crouched over the water’s edge, she thrust her arm into the shallows and snatched up an oyster drill. The large sea snails prey on oysters, and this summer in particular they’ve been ravaging her reefs.

“These guys I chuck into the reeds,” she said, hurling the pest to its presumed doom — much as somebody tending to a veggie patch might do to a garden snail caught grazing on their lettuce.

While homeowners in Florida tend to install living shorelines primarily to stem erosion, they also laud their other environmental benefits, particularly their ability to attract wildlife and support fish stocks.

“We want to plant trees, we want to conserve everything — but we’re not activists,” said Richard, a retired Air Force pilot. His living shoreline was installed in an effort to prevent erosion from reaching a stand of dead trees in a marshy section of his yard popular with eagles and ospreys, which he enjoys watching. “We’re doing everything we can to try to save it.” 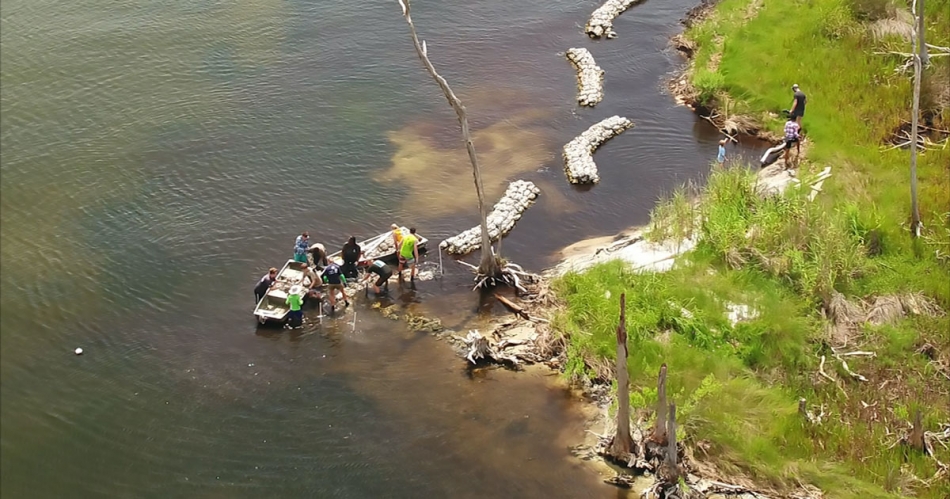 Volunteers with the Choctawhatchee Basin Alliance finished installing a living shoreline this summer at the property of Butch and Sally Richard in Shalimar, Fla.
Credit: Chris Odom/PBS NewsHour Weekend

Rachel Gittman, an East Carolina University ecologist who studies living shorelines and the reasons homeowners build them, has reviewed the scientific research on the topic. She found that studies began appearing around 2000, showing that natural shorelines support more species and more individual plants and animals than seawalls.

“Recently there have been a lot of efforts to say, ‘Well, this used to be a natural shoreline at one point, before we came in and developed it, and maybe we can learn something,’” Gittman said.

Research by Gittman and others has shown homeowners overestimate the effectiveness of seawalls and bulkheads and underestimate living shorelines. As homeowners begin installing living shorelines, the idea can spread — in much the same way that solar panels can become popular in a neighborhood after they’re installed by one or two homeowners.

With so much coastal property in private hands, Gittman sees sweeping potential for coastal conservation gains if living shorelines catch on among property owners.

“People pay attention to what their neighbors do,” she said. “The individual actions of property owners can add up.”