The bottom line answer is yes: Heat waves are longer and hotter than they used to be and some regions are suffering from catastrophic drought.  Heavy rains are morefrequent and can be more intense and rainfall records have been smashed. These events fit a pattern that climate scientists have long expected to appear as the result of increased greenhouse gases in our atmosphere. That doesn’t mean global warming is the only culprit: extreme weather was happening before global warming began. But there’s general scientific agreement that global warming has contributed to a trend toward more intense extremes of heat and precipitation around the world, is partly to blame for specific extreme weather events over the last decade and will continue to influence both in the future. 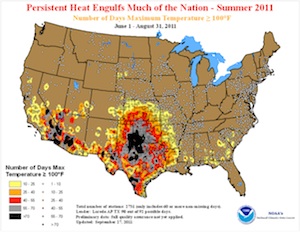 Extreme Heat and Drought of 2011

Texans love to brag about how big their state is along with everything in it. Not so much this year, though, as record-breaking heat, drought and wildfires relentlessly pummeled Texans. The heat struck nearby Oklahoma, Louisiana and New Mexico too, pushing all of the states’ resources, along with their residents, to the brink of disaster—and in many cases, right over the edge.

Scientists know that climate change is making heat extremes like
those experienced in the Southwest this year more intense
and more frequent.