The bottom line answer is yes: Heat waves are longer and hotter than they used to be and some regions are suffering from catastrophic drought.  Heavy rains are more frequent and can be more intense and rainfall records have been smashed. These events fit a pattern that climate scientists have longexpected to appear as the result of increased greenhouse gases in ouratmosphere. That doesn’t mean global warming is the only culprit: extreme weather was happening before global warming began. But there’s general scientific agreement that global warming has contributed to a trend toward more intense extremes of heat and precipitation around the world, is partly to blame for specific extreme weather events over the last decade and willcontinue to influence both in the future. 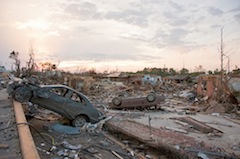 Damage caused by a tornado that touched down in Tuscaloosa, AL

People who live in the southeastern U.S. are no strangers to tornadoes, which tend to strike during the hot, humid days of spring and summer. But the outbreaks that struck in April and May of 2011 were especially numerous and deadly. April had the most twisters of any month since modern records began in 1950, and in May, the deadliest tornado since 1947 killed 161 people in Joplin, Missouri.

You need three things for a tornado to form:

2.     Wind shear (winds that change speed and/or direction the higher you go)

3.     Something — a cold front, for example—that triggers thunderstorms

We know that climate change is influencing two of these factors, fueling more atmospheric instability because it’s warming the air temperature(1,3) and adding water vapor to the air(2) which can mean more powerful thunderstorms.

A warming climate, however, might cause wind shear to decrease,(3) but it’s too early to tell. Scientists have not observed clear trends in tornado frequency, strength or geographical distribution, so they can’t say yet whether or not tornado behavior is changing due to global warming.

In mid July, much of the nation sweltered under a “heat dome” that brought roasting heat and sweltering humidity to much of the eastern two thirds of the country. At its worst, more than 140 million Americans were under a heat advisory or excessive heat warning, with the heat index - a measure of discomfort that combines both heat and humidity and describes how hot it actually feels - reaching levels typical of the area surrounding the Red Sea in Saudi Arabia.

In the Southeast, the August heat was especially brutal: