The bottom line answer is yes: Heat waves are longer and hotter than they used to be and some regions are suffering from catastrophic drought.  Heavy rains are more frequent and can be more intense, and rainfall records have been smashed. These events fit a pattern that climate scientists have long expected to appear as the result of increased greenhouse gases in our atmosphere. That doesn’t mean global warming is the only culprit: extreme weather was happening before global warming began. But there’s general scientific agreement that global warming has contributed to a trend toward more intense extremes of heat and precipitation around the world, is partly to blame for specific extreme weather events over the last decade and will continue to influence both in the future. 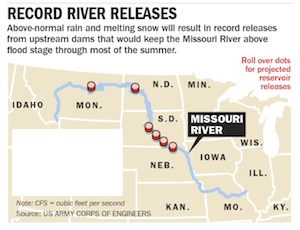 Spring 2011 brought some of the worst flooding in history, from the Upper Midwest to the Gulf of Mexico. Snowmelt and more than three times the normal spring rainfall in the Ohio Valley made rivers, including the Ohio, Missouri and the Mississippi overflow their banks along with many smaller tributaries. The Mississippi River crested at either record or near-record levels from Illinois all the way to Louisiana. 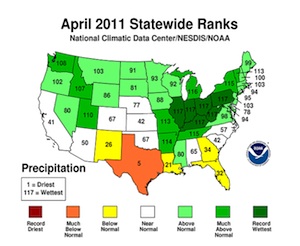 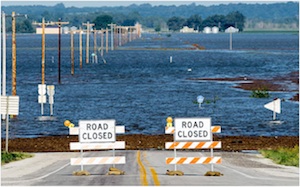 Damage caused by the 2011 Mississippi flood

While most of the headline-grabbing snowstorms of 2011 affected Northeastern cities like New York, the Midwest was slammed as well, especially by a blizzard that struck in early February, paralyzing a region that is used to plenty of snow.

In mid July, much of the nation sweltered under a “heat dome” that brought roasting heat and sweltering humidity to much of the eastern two thirds of the country. At its worst, more than 140 million Americans were under a heat advisory or excessive heat warning, with the heat index—a measure of discomfort that combines both heat and humidity and describes how hot it actually feels—reaching brutal levels typical of the area surrounding the Red Sea in Saudi Arabia.