World Weather Attribution (WWA) is a new international effort designed to sharpen and accelerate the scientific community’s ability to analyze and communicate the possible influence of climate change on extreme-weather events such as storms, floods, heat waves and droughts.

Recognizing society’s interest in reducing the human, economic, and environmental costs of weather-related disasters, WWA aims to deliver timely and reliable information on how patterns of extreme weather may be affected by climate change.

Climate Central coordinates the program and provides its secretariat. 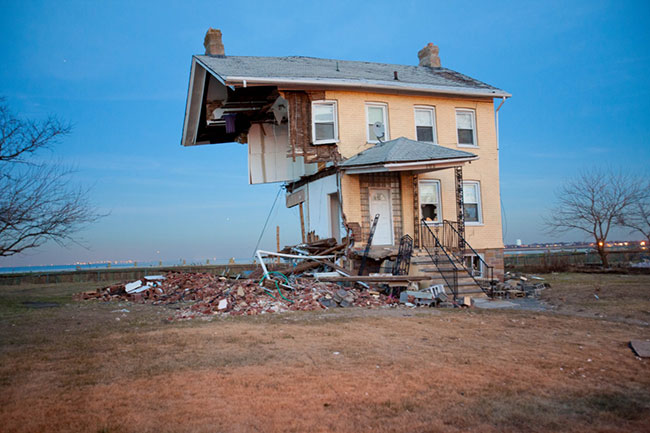 Identifying a human fingerprint on individual extreme-weather events —“probabilistic extreme-event attribution” — has been an important goal of the scientific community for more than a decade.

In 2004, Dr. Peter Stott of the UK Met Office and his colleagues published a paper in Nature [1] showing that climate change had at least doubled the risk of the record-breaking 2003 European summer heat wave that is believed to have killed tens of thousands of people.

Since then, advances in the field have prompted numerous studies, leading the Bulletin of the American Meteorological Society (BAMS) to dedicate an annual special issue to extreme-event attribution for the past four years.

This innovative combination, built on existing, peer-reviewed, methods, will enable us to conduct more rapid analyses and provide faster answers to pressing questions about high-impact events – how strong the likelihood is, for example, of similar weather-related disasters in the future.

Right now, studies of the attribution of extreme events (such as those in BAMS) require months to complete and are published long after the event.

The program will consider all types of extreme-weather events. Events that will be assessed include extreme heat and cold, heavy rainfall and floods, droughts, and also heavy snowfal and storm surges. In cases where the probability of the event appears to have been changed, we will also attempt to quantify the size of that change in order to assess the scale of the contribution from global warming. The types of events for which a quantitative analysis can be performed will expand as new attribution techniques become available and the science matures.

“The goal of this ambitious effort is to use peer-reviewed science to provide decision-makers, the public and the media with early, science-based answers to the questions of whether and to what extent global warming caused by greenhouse gas emissions played a role in an event’s probability,” said Dr. Heidi Cullen, Climate Central’s Chief Scientist.  “Our team believes that a careful science-based assessment is extremely valuable, even in cases where we can’t provide hard numbers, “ said Dr. Maarten van Aalst, Director of the Red Cross Red Crescent Climate Centre. “It is important to recognize that “we don't know” or “there is no significant trend” are also valid findings.”

This work will also help answer questions about trends in risk and vulnerability, and the role of human activity in extreme weather.

There are four possible findings of our attribution analysis of an event:

By providing a clear scientific statement (including about what may be uncertain), our objective is to inject more rigorous analysis and science-based information into coverage of — and public discourse on — extreme weather and its relationship with climate change.

The current program partnership team includes the University of Oxford Environmental Change Institute, the Royal Netherlands Meteorological Institute, the University of Melbourne, the Red Cross Red Crescent Climate Centre, and Climate Central. Our science partners at KNMI and the University of Melbourne will utilize established peer- reviewed methods to perform their attribution assessments. The Oxford team is currently building on their well-known weather@home methodology to develop the capacity to perform more rapid event assessment. Over time, we will expand the team with additional international partners to develop greater regional capacity and geographic reach.

Climate Central. In addition to serving as “secretariat” and coordinator of the World Weather Attribution partnership, the Climate Central team — led by Heidi Cullen — is also providing the interface to the science and outreach teams, coordinating Science Oversight Committee activities and peer review and leveraging its network of partners to disseminate World Weather Attribution findings. In particular, Climate Central is coordinating with communications experts and conducting social science research to identify and employ the most effective ways to communicate the science of severe weather event attribution, including the levels of certainty and uncertainty involved in such an endeavor.

Their unique approach uses very large ensembles of simulations of regional climate models to run two different analyses: one to represent the current climate as it was observed, and one to represent the same events in the world that might have been without human-induced climate change. The soundness of this methodological approach is supported by its widespread use in submissions to the annual Bulletin of the American Meteorological Society Special Issue on Explaining Extreme Events from a Climate Perspective (e.g., Rupp et al., 2013 [2], Añel et al., 2014 [3], Massey et al., 2012, [4]. This analysis used very large ensembles of a regional climate model over Europe embedded in a global circulation model to assess the change in risk of extreme precipitation under two very distinct versions of the event: 1) the observed extreme weather event itself, and 2) a model of the extreme weather event with the impact of anthropogenic greenhouse gas emissions removed. Using a distributed computing framework — weather@home (Massey et al., 2014 [5]) — members of the public facilitate multi-thousand-member ensemble weather simulation experiments at both global and regional resolution scales.

In order to accelerate the attribution analysis, the Oxford team has developed a novel approach based on using forecast sea surface temperatures (SSTs) instead of observed SSTs. The team is currently performing a proof of concept using the 2014 United Kingdom floods as a case study to demonstrate the robustness of this approach.

Royal Netherlands Meteorological Institute. The KNMI team, led by Geert Jan van Oldenborgh, focuses on empirical event attribution using historical data records and follows the methodology described in van Oldenborgh (2012) [6]. It consists of looking for a trend in the observed extremes before the event to be studied has occurred. If there is a trend, a physical model is used to connect it with the temperature rises that have been attributed to human influences in a multi-step attribution. The method is complementary to model-based methods (which are used most often for large-scale weather and climate events) as it is most sensitive when used to attribute the causes of small-scale events; it is also a useful cross-check on model results for large-scale events. These routines are being developed as part of the KNMI Climate Explorer — a research tool built by van Oldenborgh to investigate climate variability and change.

University of Melbourne. The Melbourne team is led by David Karoly. Their approach utilizes a suite of climate model simulations undertaken as part of the Coupled Model Intercomparison Project phase 5 (CMIP5) (Taylor et al., 2012 [7]). After an extreme weather event has been identified and defined, the team first assesses the capability of global climate models to simulate this type of extreme event. Different from the Oxford regional model approach, the Melbourne method relies on existing simulations from global coupled ocean-atmosphere climate models. These global models have coarser spatial resolution, but they include the effects of coupling the atmosphere to the ocean in the models and the uncertainties associated with using multiple different climate models to simulate the extreme events. This approach was used in the analysis of the record summer temperature averaged across Australia in 2012-13 (Lewis and Karoly, 2013 [8]), which showed that human-caused climate change had very likely led to at least a five-fold increase in the frequency of similar extreme summer temperatures across Australia.

Note: As new ensembles become available, they will be integrated into our analyses. Working with multiple climate models and data sets provides additional analytical power.

Red Cross Red Crescent Climate Centre. The Climate Centre team is led by Dr. Maarten van Aalst and Erin Coughlan. The Climate Centre is a specialist reference center for the International Federation of Red Cross and Red Crescent Societies (IFRC) and helps the Red Cross and Red Crescent Movement and other partners reduce the impacts of climate change and extreme-weather events on vulnerable people. It will use its humanitarian network to identify disasters that will be analyzed by the WWA initiative. Further analysis will help place the event in the larger context of patterns of changing risk, including trends in vulnerability and exposure. The Climate Centre team is also helping develop an index of published articles relevant to specific events and geographical regions that will be consulted when WWA assesses a specific event. This “living database” includes peer-reviewed studies on regional trends in extremes [9], and in hydrology, decadal variability, future projections, and other published attribution studies that will allow us to more quickly assess the state of the science.