It is now all but certain that 2015 will be the hottest year since record keeping began. Scientists from the World Weather Attribution initiative along with colleagues at the University of Reading performed a simple analysis to assess what factors played a role in this record heat. Specifically, we looked at the roles of greenhouse gas emissions associated with global warming, the natural climate oscillation known as El Niño, as well as solar activity and volcanic aerosols.

Based on the analysis described in the Methodology section below, we estimate the 2015 global temperature anomaly to be 1.05ºC (1.89ºF) above the 1850–1900 average that the IPCC takes to be “pre-industrial.” The year 2015 is therefore likely to be remembered as the first year that two symbolic thresholds were set: the 1ºC (1.8ºF) temperature anomaly threshold and the 400 parts per million (ppm) CO2 threshold.

Of that 1.05ºC temperature departure from pre-industrial, roughly 1.0ºC is due to the anthropogenic forcing, about 0.05ºC (0.09ºF) to 0.1ºC (0.18ºF) is due to El Niño and about 0.02ºC (0.04ºF) is due to higher solar activity. The remainder is well within the range of variations due to random weather, especially winter weather in Siberia and Canada. Volcanoes contribute very little at this time.

First, the team extended the NCEI global mean surface temperature time series through the end of the year by assuming that November and December temperatures are similar to September and August. (October temperatures were unusually high, in part due to random weather fluctuations that are unlikely to persist into the next months.) This extrapolation gives an expected value for the global mean surface temperature of about 0.87ºC above the 1951-1980 average, which translates to 1.05ºC above the 1850–1900 average that the IPCC takes to be “pre-industrial.”

This temperature time series was fitted to the logarithm of the equivalent CO2 distribution (this includes CO2, other greenhouse gases, and aerosols) from IIASA, volcanic aerosols and solar radiation. As can be seen in Figure 1, this gives a very good fit, with 2014 almost on the fitted trend and 2015 clearly above it. The forced trend is for just about 1.0ºC due to anthropogenic forcing, and 0.02ºC due to the solar cycle, which was above average in 2015. The remainder, about 0.05ºC, is mainly due to the developing El Niño, which tends to heat the globe with a delay of around five months. Various ways to take this delay into account give different estimates of the contribution of the current very strong El Niño, from 0.05 to 0.1ºC. Assuming a shorter delay for this event gives higher values. Due to the delayed response of the global temperature, the influence of El Niño on global mean temperature will be greater in 2016 than in 2015, as it was in 1998 in the year after the peak El Niño ocean temperatures in December.

In addition the observational data was compared with simulated global mean temperature rise from 1850–1900 in the CMIP5 models (Figure 2). The CMIP5 ensemble was normalized against observations over a long period without volcanic eruptions, 1911-1960. This is driven by the observation that the global mean cooling due to volcanoes is much larger in CMIP5 simulations than in the observations and hence taking a period with large volcanoes, such as 1986-2005, gives an offset between the two curves. The recent observations are back in the middle of the plume after a few years on the low side. This comparison is influenced by many factors: the reference periods, the speed at which air quality has improved worldwide, the effects of the relative weak solar cycle and volcanic eruptions. It is therefore impossible to deduce the effect of only CO2 from the warming trend up to now. 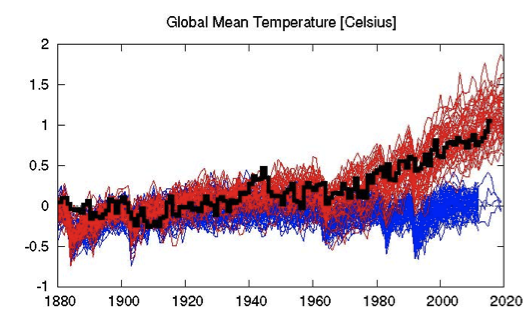 Figure 2: CMPI5 comparison: observational data was compared with simulated global mean temperature rise starting from 1850–1900 in the full CMIP5 ensemble (historical forcings up to 2005, RCP4.5 from 2006 onward, red) and the ensemble with only natural forcings (historicalNat, blue).

The time series of effective CO2 concentrations has observations up to 2005 and RCP8.5 values afterwards. The RCP scenarios assume a more significant decrease in air pollution leading to aerosols than was realized over the past decade. Some volcanic eruptions a few years ago and the recent decrease in the strength of the solar cycle were also not in the CMIP5 experiments. This implies that this simple fit, and also the CMIP5 models, are biased high because they assume more sunshine and a cleaner atmosphere than we really have, and hence more sunlight reaching the ground. This is why the IPCC WG1 AR5 report in Chapter 11 gives an assessed range for 2015–2035 that is lower than the raw CMIP5 model output, see e.g. http://www.climate-lab-book.ac.uk/comparing-cmip5-observations/. As it applies to this analysis, it means that the last decade of effective CO2 concentration (blue line) goes up too quickly. Other estimates have put 2014 slightly above the trend line.