June 8 is World Oceans Day, a time to raise awareness about the importance of the oceans to our planet. Ocean currents and broader circulations move vast amounts of water around the world, redistributing heat and energy, and helping regulate the global climate. Wind-driven currents like the cold California Current and the warm Gulf Stream are drivers of local climates. But a larger ocean circulation caused by differences in temperature and salinity drives even greater amounts of water around the world. This thermohaline circulation, also known as the global ocean conveyor belt, involves both surface and deep water throughout the global ocean. 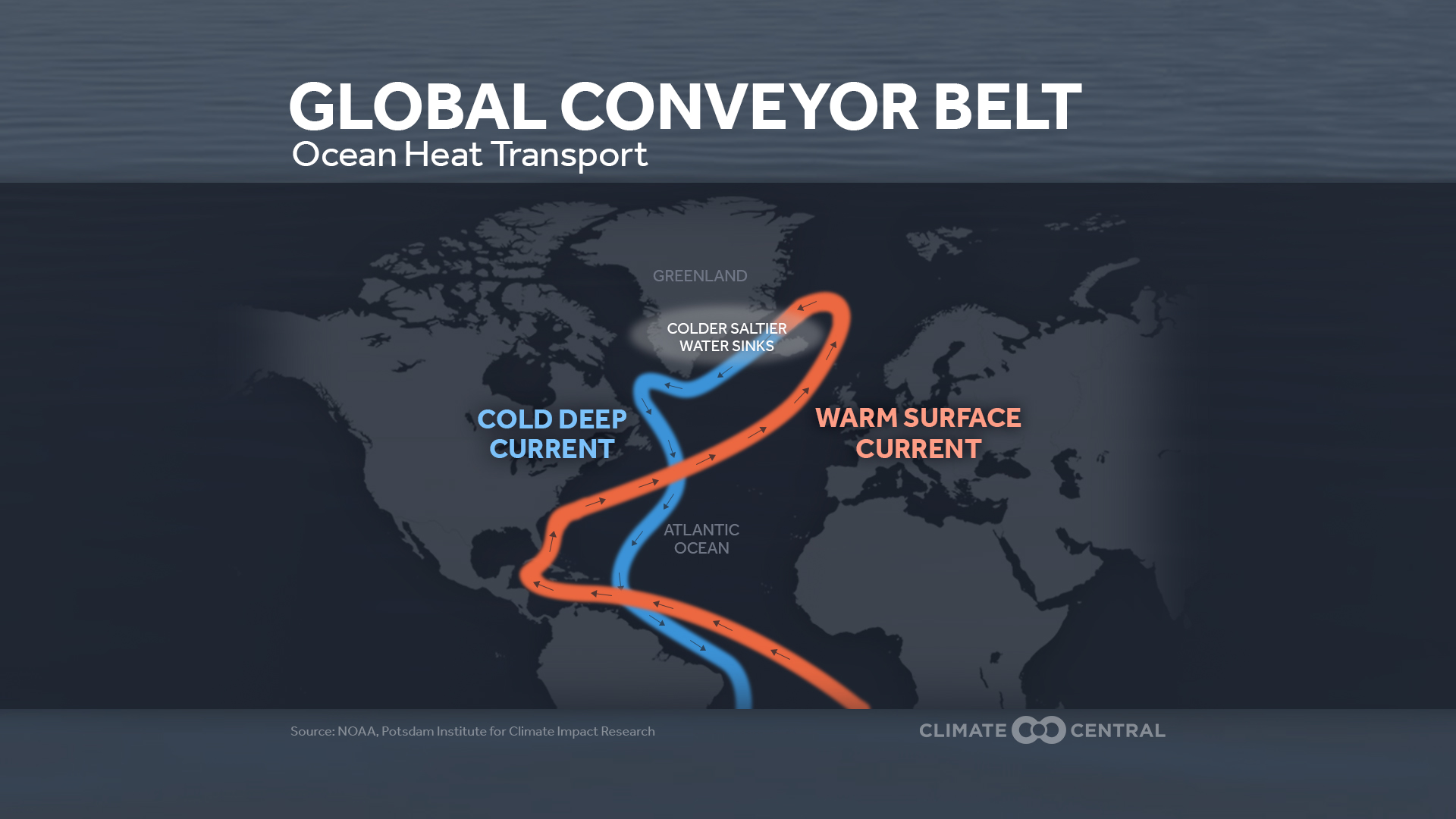 This conveyor brings warm water northward in the western North Atlantic and actually contributes slightly to the Gulf Stream. As the water arrives in the colder subarctic and sea ice forms in areas on the surface, the leftover water becomes saltier and sinks. That sinking saltier water then travels southward deep within the Atlantic as a deep water boundary current, all the way to the cold Southern Ocean. It is a slow mover, with water taking about 1,000 years to make the trip around.

But the conveyor appears to be slowing down. Fresh water from the melting Greenland ice sheet is running into the North Atlantic, decreasing the salinity of the ocean there so the water does not sink as much. Reconstructions from corals in combination with global simulations indicate the conveyor is slowing, with one estimate indicating a 15 percent slowing of the conveyor since the middle 20th century.

This slowing circulation means less heat is transported into the North Atlantic, so the water there is colder, and this leaves the warmer water to dwell longer in the western Atlantic. The warming water can add additional fuel to coastal storms along the East Coast of the U.S., and its slower movement means higher sea levels there, as the slower speed effectively piles up water along the coastline. The conveyor also brings nutrient-rich water into the Atlantic from the deeper waters of the Southern Ocean, so the slowdown diminishes the supply of these nutrients that aid the growth of seaweed and algae, which are among the components at the base of the ocean food web.

In the very long term, a shut down of the circulation would bring cooling to Europe, as the warmth supplied to Europe by the northward branch of the conveyor would also stop. But in the shorter term, cooler water in the North Atlantic actually correlates to warmer European summers. While the conveyor is expected to slow further during the century, it is not expected to stop anytime soon. Although its failure was a premise of a Hollywood disaster movie, the amount of fresh water running from the melting Greenland ice sheet into the North Atlantic needs to be much higher than any current projections to bring the conveyor to a stop.  This video from three leading climate scientists explains why the movie was inaccurate.

Methodology: Description of the global ocean conveyor is based on publications from NOAA and Dr. Stefan Rahmstorf at Germany’s University of Potsdam. Additional impacts of a slowing circulation are from Cesar et al. (2018) and Jackson et al. (2015).