We consulted with Phil Klotzbach of the Colorado State Tropical Meteorology Project to examine the historic number of Atlantic named storms that have undergone rapid intensification and to acknowledge limitations in detection. As a result, we are using two starting points for this week’s analysis. The first is 1950, a few years after reconnaissance aircraft analyses began. The second is 1980, a year after regular satellite analyses were available. These data show the active period of the 1950s and 1960s, then a lull, followed by a bigger spike, with the influence of the Atlantic Multidecadal Oscillation (AMO) driving the lower values in the 1970s and 1980s. In a further analysis, one study earlier this year found an increase in rapid intensification from 1986-2015 tied to warming water east of the Caribbean Sea. While the study suggests the AMO is the primary influence, there has also been a net ocean warming on top of that cycle. 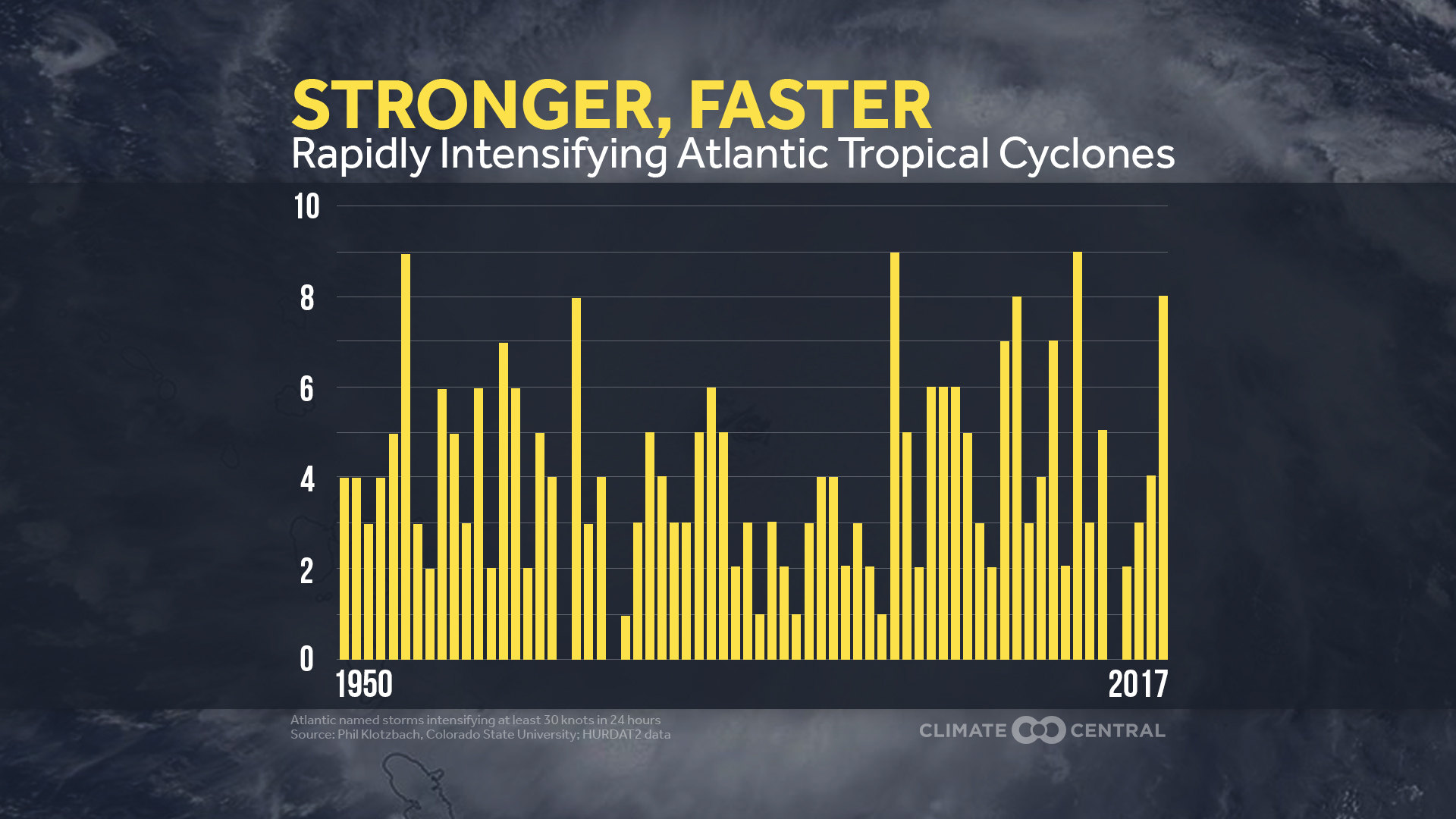 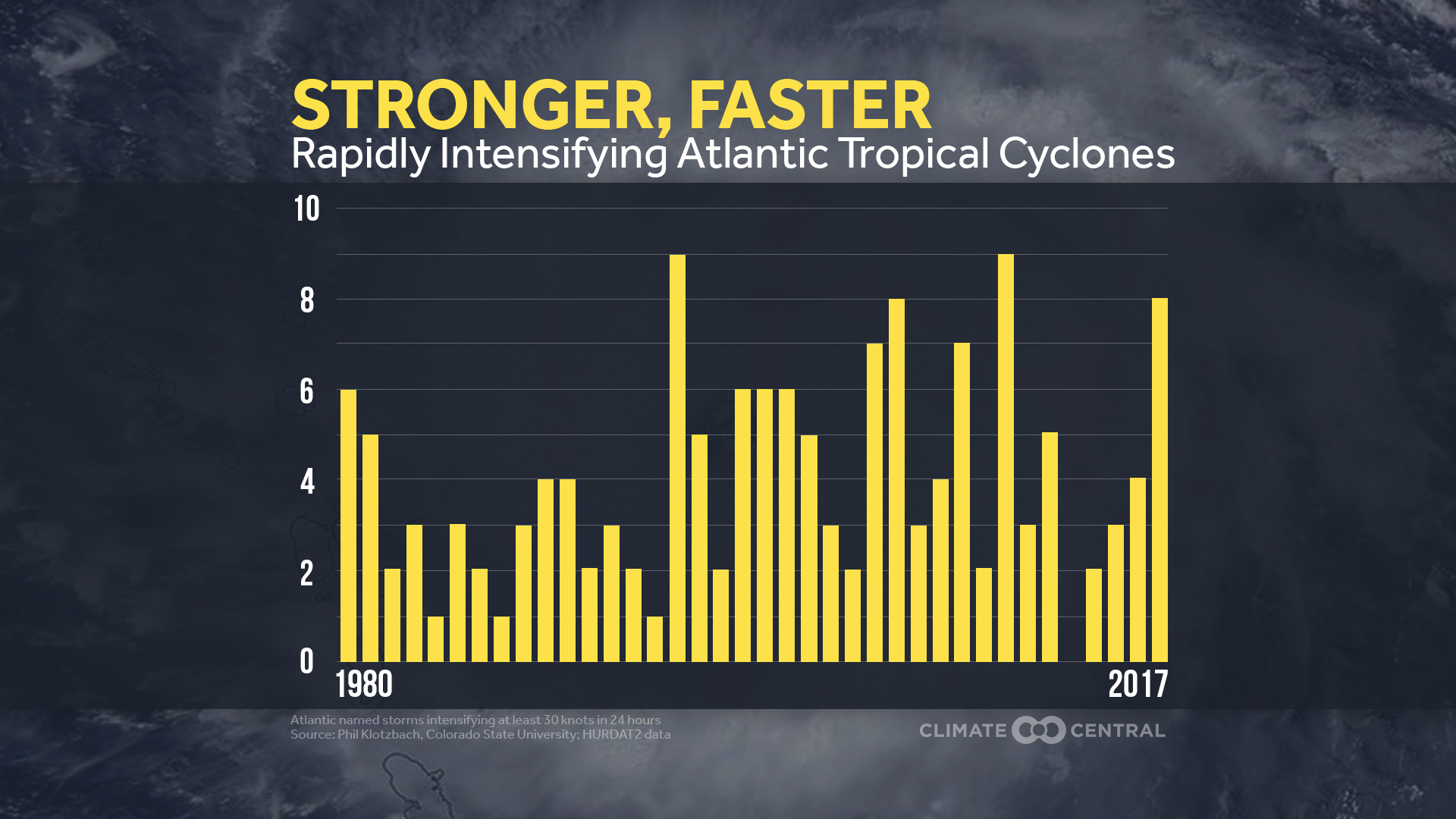 As the world continues to warm from the increase in greenhouse gases, the coming decades are likely to bring hurricanes that intensify even more rapidly. In an extreme example from today’s climate, one study indicated that 60 knots (70 mph) of intensification in 24 hours only happens about once a century. With no change in the rate of greenhouse gas emissions, that same extreme intensification rate could happen once every five to 10 years by 2100.

Rapid intensification, especially in the last 24 hours before landfall, leaves people less time to prepare for a hurricane’s impacts. And even people who know a storm is coming may not be ready for how much more intense the storm is when it arrives. For example, less than 24 hours before landfall in Dominica, Maria was forecast to hit the island as a low end Category 3 storm, and it actually made landfall as a Category 5. The science is advancing on the effects of climate change on hurricanes, and even if uncertainties remain, there are already things we do know. A warming climate intensifies the water cycle, so extreme rainfall is getting heavier. Global sea level rise means that storm surges will continue to be higher and extend farther inland, affecting many coastal populations, especially on the East and Gulf Coasts. Also, we are breaking many records in the Atlantic and globally.

Methodology: Special thanks to Dr. Phil Klotzbach of the Colorado State Tropical Meteorological Project for assistance.

A Rapid Intensification period (RI) is defined by the National Hurricane Center as an increase in the maximum sustained wind speed of at least 30 knots in 24 hours. Hurricane data were collected from the HURDAT2 dataset and intensity of storms was analyzed at synoptic times (00, 06, 12, 18 GMT). Only storms that had reached tropical storm status were considered for the rapid intensification analysis and subtropical systems were excluded. Because of limitations in detection (before satellite and aircraft reconnaissance), HURDAT2 data before 1950 were excluded in this analysis.