Cherry Blossoms in a Changing Climate

The blooming of the cherry blossoms along the Tidal Basin of Washington, D.C. is an annual rite of spring. During the period from 1981-2010, the average peak bloom date was April 1. This year, the National Park Service forecasts the blossoms to peak slightly earlier than average, between March 27-31. The warm February was the reason that both the NPS and Washington’s Capital Weather Gang initially predicted an even earlier bloom, by as much as 7-10 days, but the recent cool spell has motivated both organizations to revise their predictions much closer to the average peak date.

According to the NPS, Washington is warming at a rate of 3.3°F per century, and this has triggered blooming an average of five days earlier than the period between 1931-60. Washington D.C. is not the only area where this has been observed, as similar results have been found for cherry trees in Japan and Korea. Warming winters bring the trees out of dormancy earlier, making them more susceptible to damage from a freeze in the spring. Just last year, a freeze after a warm February damaged about 70 percent of the Yoshino cherry blossoms along the Tidal Basin. 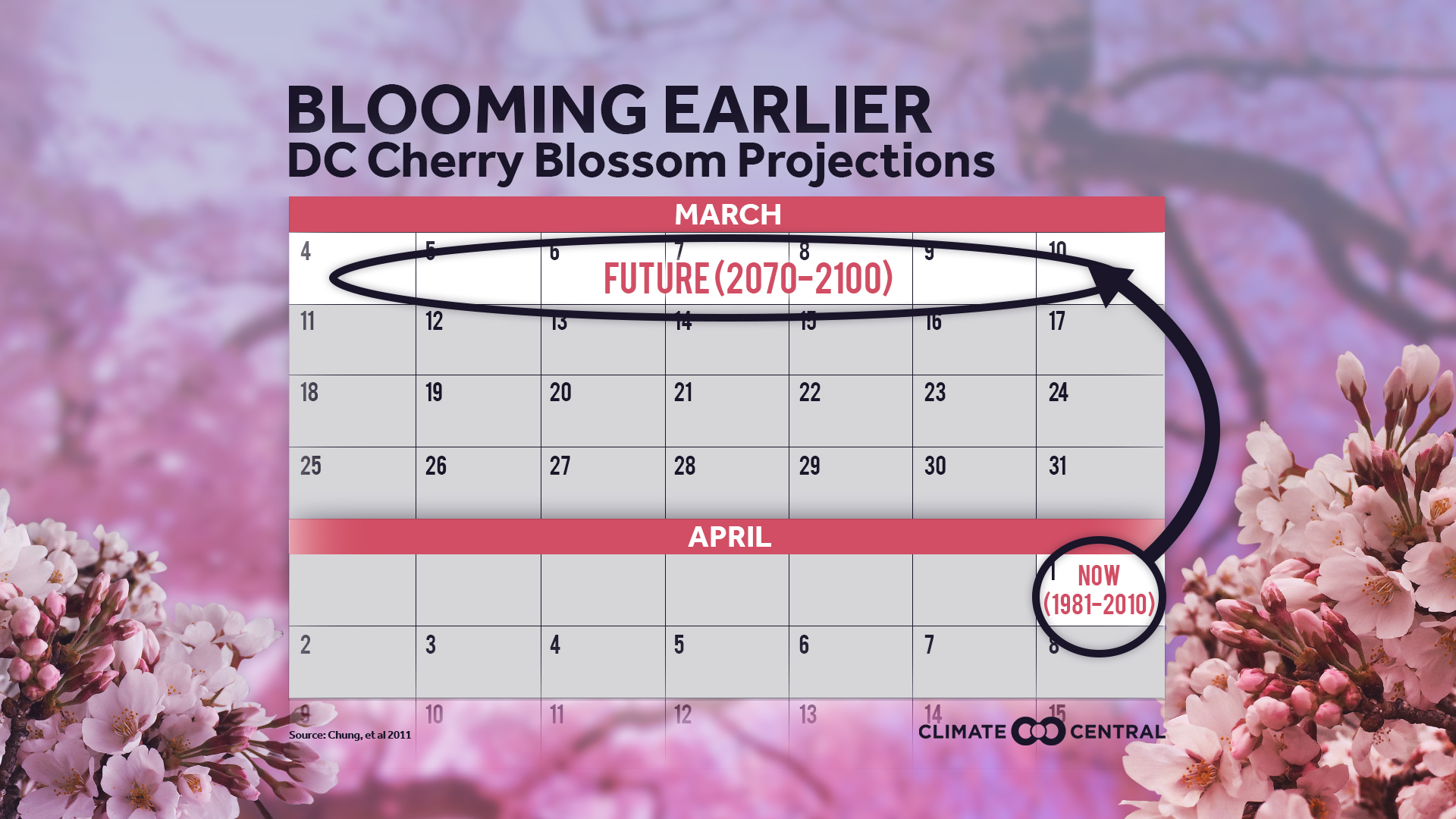 While the climate continues to warm from the increase in greenhouse gases, the average date of the peak blooms will move even earlier in the year. One study, referenced by the NPS, was successfully used to forecast peak bloom dates retroactively from 1991-2010. Its method was then used to forecast peak bloom periods in warming climate. With no change in the rate of greenhouse gas emissions, the peak bloom date may be March 19 by mid-century, and March 4 before the end of the century.

Methodology: The National Park Service has been tracking the peak bloom in Washington, D.C. for more than 80 years. Climate Central used NPS data for Yoshino cherry trees in D.C. to calculate the peak bloom between 1931-1960 and 1981-2010 (current climate normal). Although there are data on several types of trees at the Tidal Basin, Yoshino cherry tree bloom is used to calculate peak bloom. The most recent data can be found at the NPS website. Projections of first bloom are based on IPCC A2 warming scenario from Chung et al. 2011.

For more current and historical phenology data — the timing of plant and animal life cycles — visit the National Phenology Network.