2016 Was the Hottest Year on Record

NOAA and NASA analyses both indicate that 2016 was the hottest year on record globally. NOAA’s calculation shows the globally averaged temperature over land and ocean surfaces was 1.69°F (0.94°C) above the 20th century average. NASA indicated a temperature 1.82°F (1.01°C) above that average. The calculations between the two agencies differ only slightly, as NASA’s calculations are extrapolated to account for polar locations with poor station coverage, while NOAA relies more heavily on the polar station data. But both agencies’ calculations show the same warming trends. 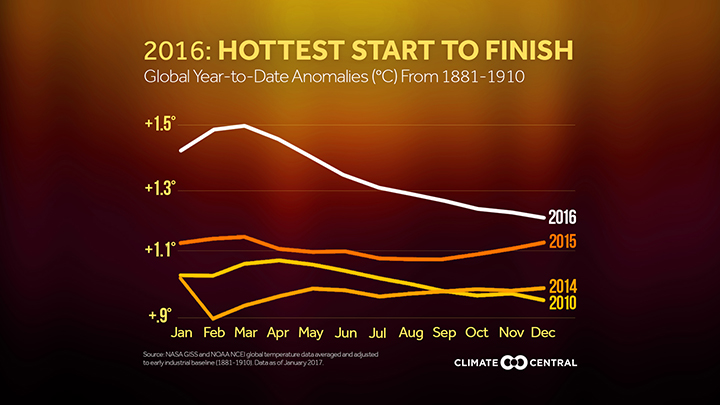 Combining the data sets from the two agencies indicates that the the average global temperature was 2.18°F (1.21°C) above a 1881-1910 baseline. Using this older period as a baseline gives a better indication of how much warming has taken place since the start of the industrial era, and this is the period of warming that was the focus of the 2015 Paris Climate Agreement.

The surface ocean temperature is a large component of the total global temperature. El Niño was in place at the beginning of 2016, giving temperatures a small boost, but it faded quickly over the summer, replaced by a weak La Niña in the fall. 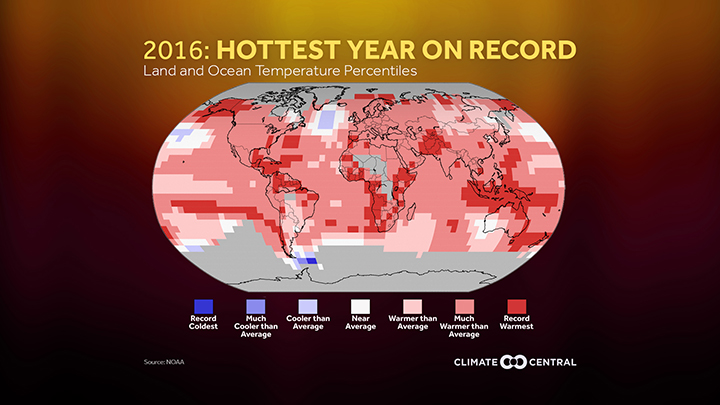 Consequently, the overriding cause of 2016’s record heat, and the general upward trends in temperatures that our planet is experiencing, is the increase in atmospheric greenhouse gases from burning fossil fuels. The concentration of carbon dioxide in the atmosphere has permanently passed 400 ppm for the first time in human history.

NOAA and NASA aren’t alone in their assessment of record heat in 2016. Two other international meteorological services concur. The Japanese Meteorological Agency indicates 2016 was the hottest year on record, with four of the five hottest years on record coming since 2013. The U.K. Meteorological Office has also come to the same conclusion about 2016.

NOAA records go back to 1880. Some additional statistics: