What Is America’s Most Fuel-Efficient Airline?

More than 9 million commercial flights depart U.S. airports each year at a time when aviation accounts for the fastest-growing greenhouse gas emissions in the U.S. transportation sector. The aviation industry contributes about 2 percent of global carbon dioxide emissions, and the European Commission projects that by 2020 the global aviation emissions will be about 70 percent higher than they were in 2005 even with airlines' efforts to improve fuel efficiency. 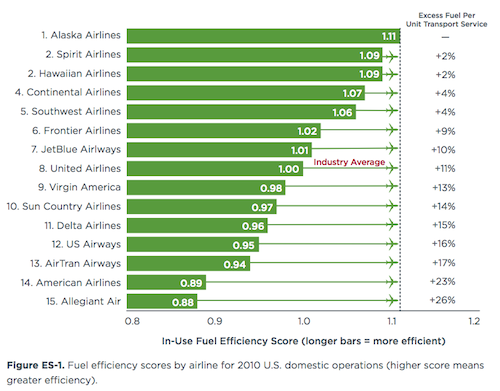 The International Council on Clean Transportation's ranking of U.S. airlines operating in 2010 based on its model of fuel efficiency.
Credit: ICCT

ICCT’s analysis ranked the 15 mainline air carriers that were operating in the U.S. in 2010, including Continental Airlines, which merged with United Airlines the same year.

The Department of Transportation data only go so far, however, and ICCT analysts say there are many unknowns about how fuel efficient airlines are overall. The group’s analysis was based on an economic model using only publicly reported data to compare airlines’ fuel efficiency relative to each other, said analysis co-author Daniel Rutherford, ICCT aviation and marine program director.

“In essence, anything that an airline does to reduce its fuel burn is properly credited in the top-level rankings providing they’re reporting their data properly,” he said. “The challenge then comes to explaining those results.”

The analysis suggested numerous factors that could affect fuel consumption: an aircraft’s age, engine design, size, seating density and use of fuel efficiency equipment such as “winglets” on the tips of a plane’s wings, and an airline’s operational procedures.

The study accounts for an airline’s total departures and the number of miles an airline flew each revenue-generating passenger (called revenue passenger miles, or RPMs). The more RPMs an airline provides per unit of fuel, the more efficient the airline.

“However, travelers’ ability to avail themselves of an airline’s RPMs is also important, with each airline striking a unique balance between getting passengers to their final destination as directly as possible with the need to provide access to all its potential customers,” the study said. “Carrying more, flying further and offering more flights — either by serving more airports or flying more frequently — all increase fuel burn.”

ICCT assigned each airline a fuel efficiency score, with 1 being the industry average and any score greater than that signifying an airline that is more fuel-efficient than average. The analysis showed a 26 percent gap between the least and most fuel efficient airlines.

The group called the analysis a “first step” in providing an accurate picture of the U.S. commercial aviation industry’s fuel efficiency, and plans to update the report annually as more information about airlines’ fuel efficiency becomes available.

“Unfortunately, few consistent standards exist to compel airlines to disclose publicly comprehensive data on fuel use and aircraft operation, particularly outside of the United States,” the analysis concluded. “While companies typically view such figures as proprietary, more complete and accurate data would help policymakers make sounder decisions about this highly complex industry.”

Related Content
Flights in the Pacific Fingered as Big Climate Culprit
Delta Becomes First U.S. Airline to Add E.U. Emissions Fee
Court Upholds Cap-and-Trade Program for Airlines, but Ruling May be Up in the Air