Just five days into the 2013 Atlantic Hurricane Season, and the first named storm system of the season has formed in the Gulf of Mexico. Tropical Storm Andrea is a weak tropical storm with maximum sustained winds of 40 mph as of early Wednesday evening. It is not expected to intensify significantly before making landfall near Tallahasee, Fla., on Thursday evening, but may ride up the East Coast as a wind-blown, soaking rainstorm through the weekend.

The National Hurricane Center has issued a tropical storm warning for the west coast of Florida from Boca Granda to Ochlockneee River, with tropical storm watches going up from Flagler Beach, Fla., to Surf City, N.C. 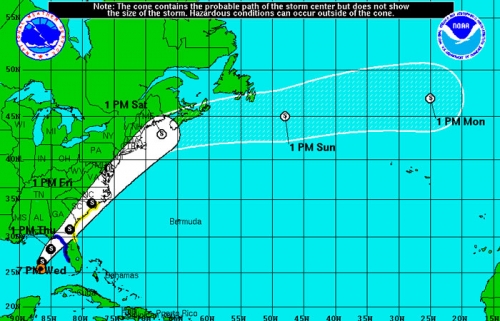 The biggest threat from the storm will be the plume of heavy rain it will spread from Florida to the Northeast during the next several days, potentially leading to flooding in some areas. Already, it is spreading heavy rain into water-logged Florida, where flooding is a growing concern. Depending on the strength of the storm, some coastal flooding is also possible along portions of the Florida Gulf Coast.

The National Weather Service is forecasting several inches of rain across the Florida peninsula through Thursday night, along with the possibility of isolated tornadoes. In addition, minor coastal flooding is possible along the Florida Gulf Coast, as onshore winds help pile up water at the shore. Strong onshore winds may also be a concern as the storm moves just offshore of coastal Georgia, South Carolina, and North Carolina on Friday. 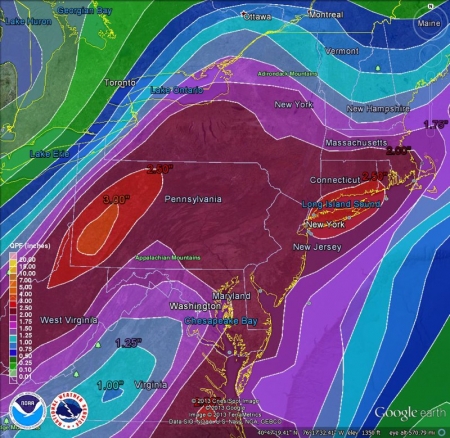 The National Hurricane Center said in a statement:

As the center of the storm moves over Florida, computer models are nearly unanimous in seeing it move up the East Coast, ahead of a stationary front that will be draped along the Appalachians. This is a setup that will favor heavy rainfall, and may cause river flooding in the Mid-Atlantic region, according to the National Weather Service forecast office in Philadelphia. Between 2 and 4 inches of rain are expected in some locations along the East Coast. However, as the Capital Weather Gang blog reported, computer models have not yet settled on a consensus of where exactly the heaviest rains are most likely to fall.

The timeframe for the most heightened river and small stream flooding threat in the Mid-Atlantic states and Northeast would be between Saturday and Sunday.

Tropical Storm Andrea is not projected to be particularly intense as it moves up the eastern seaboard, so strong winds and coastal flooding are not considered major concerns in the Northeast, although the NHC does project it will maintain tropical storm intensity beyond Florida.

Editor's Note: This story has been updated to reflect that the storm was upgraded to Tropical Storm Andrea at 6 p.m. ET.