Tropical Storm Andrea is barrelling up the eastern seaboard after bringing heavy rain, high winds, a modest storm surge, and nearly a dozen tornadoes to Florida on Thursday. The storm is mainly a rain producer now, and is losing its tropical characteristics as it moves from the Carolinas northeastward to a position near Nantucket Island by Saturday morning, according to the National Hurricane Center. 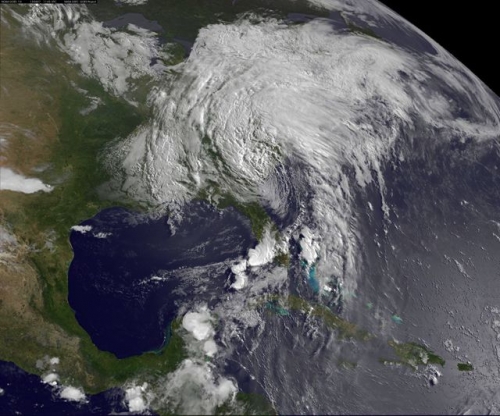 Tropical Storm Andrea covered most of the East Coast on Friday morning.
Click on the image to enlarge. Credit: NASA via CIMSS.

The storm is sending a plume of tropical moisture up the East Coast, hugging the I-95 corridor, and 2 to 4 inches or more of rainfall is falling from South Carolina to Maine. The rainfall is already causing flash flooding, and may result in river flooding as well, particularly in the Mid-Atlantic and Northeast. The National Weather Service forecast office in New York City warned of potential rainfall rates of 1 inch per hour for several hours on Friday afternoon and Friday night. 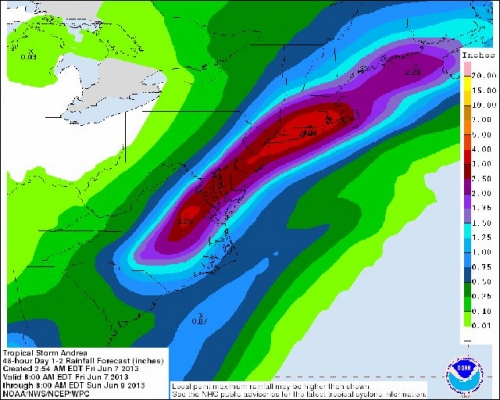 Forecast total rainfall from Tropical Storm Andrea, showing the bullseye right along the Mid-Atlantic and Northeast coastline.
Click on the image to enlarge. Credit: NOAA/HPC.

The storm’s strongest winds are mainly confined to the immediate coastline of the Carolinas, and as the remnants of Andrea move northeast, the wind field is likely to stay offshore, sparing the I-95 corridor of tropical storm force winds, although it will still be windy.

Minor storm surge flooding is possible from the Carolinas to Virginia, but is not a threat for the Chesapeake Bay or New Jersey coastline, which is good news after the devastation wrought by Hurricane Sandy last year.

Satellite animation of T.S. Andrea as it made landfall in Florida's Big Bend region on June 6. Credit: NOAA.

In Florida, Tropical Storm Andrea spawned nearly a dozen tornadoes, dumped 3 to 6 inches of rain, and caused a maximum storm surge of 4.55 feet at Cedar Key. The peak wind gust recorded in the Sunshine State was 58 mph in St. Petersburg.