The Most Detailed Visuals of Hurricane Sandy, Revealed

Scientists have recently developed awe-inspiring visualizations of Hurricane Sandy, which devastated the Northeast and Mid-Atlantic states a year ago. The visualizations, created using state-of-the-art computer models, provide some of most detailed looks at any hurricane to date. 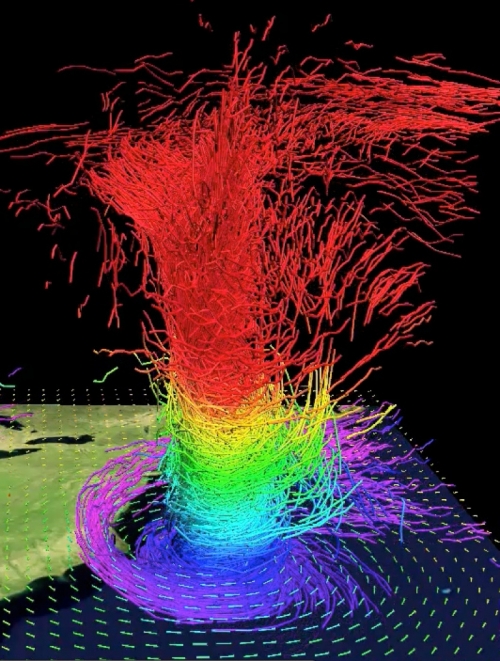 In this 3-D map of potential temperature, relatively cool air wraps around Sandy's core near the surface (purple and blue colors), while air parcels gain heat from moisture condensing into clouds and precipitation as they ascend through the storm’s core.
Click image to enlarge. Credit: UCAR.

Scientists based at the National Center for Atmospheric Research (NCAR) in Boulder, Colo., used an advanced hurricane computer model to create mesmerizing images and animations that almost succeed in making the destructive and deadly storm appear to be a beautiful work of art.

The hurricane went through multiple phases. After rumbling through the Caribbean and striking Cuba, it veered north-northeastward just off the East Coast. The storm was officially classified as a post-tropical cyclone as of 7 p.m. EDT on Oct.29, 2012, only an hour before it made landfall, and after hurricane force winds had already begun buffeting the New York and New Jersey coastlines.

Climate Central posted the initial round of visualizations from this team in January. But now, a team including NCAR's Mel Shapiro, the National Center for Computing Applications (NCSA), Cray Computing, and the U.S. Office of Naval Research has produced addition simulations at even higher resolution.

The visualizations show how Sandy’s life cycle was unique — going through multiple tropical and non-tropical phases as it interacted with the jet stream and surface weather features, such as a cold front draped along the East Coast. 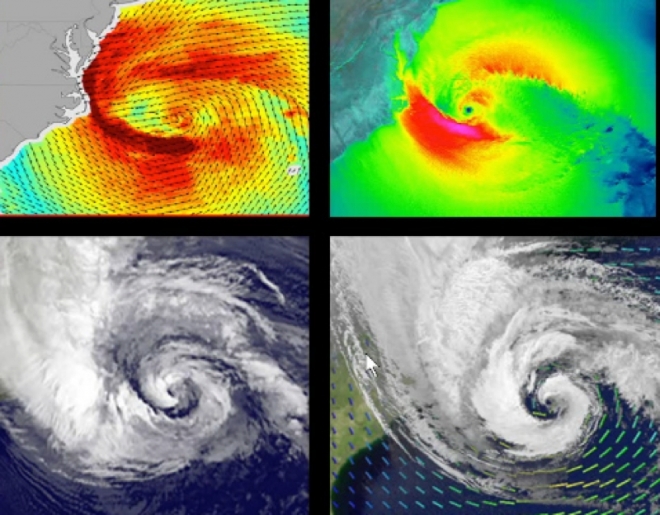 
Robert Henson, a meteorologist and science writer with the University Corporation for Atmospheric Research in Boulder published a story about the new data, explaining the many never-before-seen atmospheric interactions that it reveals.

“As Sandy moved northeast, contrasting air masses created a pseudo-frontal system along the edge of the Gulf Stream’s warm water. The vorticity, or circulation, along this frontal zone (picture an atmospheric rolling pin oriented along the Gulf Stream) was gradually ingested by Sandy and tilted into vertical vorticity (now picture the rolling pin standing on one end),” Henson wrote. “This helped the storm’s core to intensify, tighten, and regain its Category 2 status. It’s roughly similar to the smaller-scale process by which a supercell thunderstorm can ingest, tilt, and concentrate spinning air to produce storm-scale circulations (some of which can generate tornadoes).”

This intensification came as the storm was shoved westward into the U.S. by an area of blocking high pressure in northeastern Canada and a huge dip in the polar jet stream.

Henson makes an important point about Sandy’s winds, writing, “Even while Sandy was still a full-fledged hurricane, its circulation was so large that its northern edges were more akin to an extratropical (nontropical) cyclone. About 24 hours before Sandy made landfall, cool air began to wrap around its warm core, eventually surrounding it. Although this process meant Sandy was doomed as a tropical storm, it also may have intensified Sandy’s low-level winds.”

On a highly technical level, Henson notes that Sandy developed a rare “warm seclusion,” which typically occurs in strong winter storms over the ocean when pockets of warm air form within their cold cores. As a hurricane, Sandy had a warm core, meaning that temperatures near the storm’s center were warmer than the surrounding air, but colder air eventually worked its way into the center of the storm. “This is the first time such a dramatic warm seclusion has been documented in a landfalling U.S. hurricane,” Henson wrote.

NCAR’s Shapiro worked with the NCSA to create the most detailed simulations of Sandy. In the computer model runs, each horizontal grid point was separated by just 1,600 feet, a far more fine-scale presentation than the typical grid boxes used in most operational computer models used for weather forecasting. For example, the National Oceanic and Atmospheric Administration's (NOAA) highest-resolution operational hurricane forecast model, known as the HWRF, is currently being run at a resolution of 27 kilometers, meaning each horizontal grid point is separated by nearly 17 miles.

The calculations required 58 hours of time on a supercomputer known as “Blue Waters.“ Since the model includes 150 vertical layers, that means that weather conditions were calculated at more than 4 billion points for each second in a 96-hour simulation,” Henson wrote.

On a related path, NCAR researchers Tom Galarneau, Chris Davis and Mel Shapiro have analyzed Sandy through a separate round of high-resolution simulations and published their analysis in a scientific journal.

The researchers are seeking ways to incorporate their insights into operational forecasts through NOAA's Hurricane Forecast Improvement Program, which runs through 2019. That program is aimed at dramatically improving forecasters' ability to anticipate changes in tropical storm and hurricane intensity, which currently lags far behind their ability to accurately forecast a storm's eventual track.