July was hot: Washington, D.C., Oklahoma City, Philadelphia, and Austin set records for not just their warmest July in history, but their warmest month on record. The heat prompted people to hide indoors, crank up the air conditioning, or attempt stunts such as cooking eggs on the roof. But what made this month unusual wasn't only the hot days, but rather the hot nights.

Curious about these numbers, I looked more into the past decade of temperature records, and also spoke with Climate Central’s staff scientists. Have nights generally warmed faster than days? And if so, why? 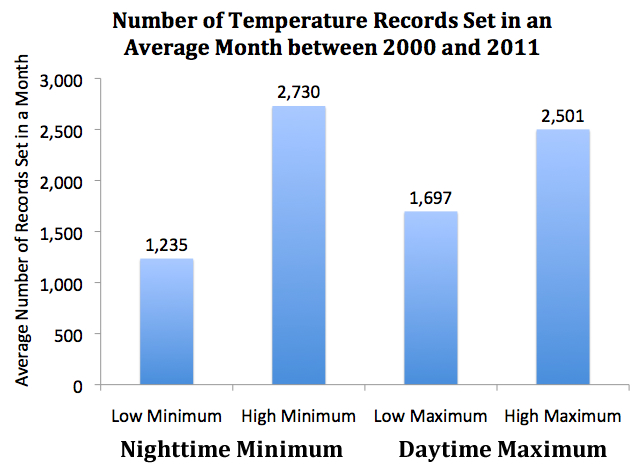 Since 2000, in the average month, record highs (high maximum temperature) beat out record lows (low minimum temperature) by a two to one margin. This is exactly what has been found in previous peer reviewed studies — including this study, published in Geophysical Research Letters in 2009, by Climate Central’s Claudia Tebaldi and three other researchers.

All of this is all a fancy way of saying “nights have warmed more than days.”

I spoke with Phil Duffy, Climate Central’s chief scientist, about why nighttime lows are warming faster than the daytime highs. He replied that the answer isn’t straightforward, and then he referred me to research that has shown that an increase in cloudiness (as well as a few other factors) has warmed nights more than days. During the day, clouds both warm and cool, as they act like a blanket to reflect heat back to the surface (warming), but they also reflect sunlight back to space (cooling). At night, they only warm temperatures, acting like an insulating blanket. Thus, nights warm more than the days, and this is exactly what climate models predict. In fact, this is a good example of climate models making a prediction (warmer nights), and then having the prediction born out by the data.

We will come back to this issue in future weeks, as we compile more data on nighttime temperatures and examine climate model projections more closely.

Below is an info-graphic that lets you look at these four types of records for any month since January 2000. Notice that there is a significant amount of variation between months, but that warm temperature records, and especially record high nighttime temperatures, outnumber the cold temperature records. (I also note on the graphic how many possible records there were in a given month, which is roughly the number of stations times the number of days in the month.) All of the data in the graphic comes from NCDC.