A multiday severe weather outbreak continues to hammer the Midwest and Plains States, and the National Weather Service is warning that the Oklahoma City area, which was devastated by the Moore tornado earlier this month, may see more significant tornadoes on Friday. The severe thunderstorms are likely to form along a frontal zone that is draped from the Midwest down to the Plains, with a disturbance at the upper levels of the atmosphere adding a necessary spark to the already unstable situation. 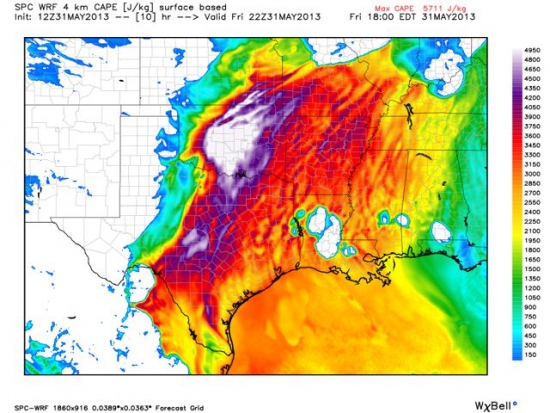 Computer projection showing the Convective Available Potential Energy (CAPE) on Friday afternoon, with a maximum centered in Oklahoma. CAPE is one measure of how unstable the atmosphere is.
Click image to enlarge. Credit: Weatherbell.com

Temperatures have exceeded 100°F in parts of the Sooner State, and the Storm Prediction Center in Norman has issued a tornado watch with a “Particularly Dangerous Situation” designation, meaning that there is a likelihood of significant tornadoes in the watch area. That so-called “PDS watch” includes the Oklahoma City metro area and is in effect until midnight Friday, central time. Another tornado watch was in effect for eastern Kansas and much of central Missouri as of 4 p.m., with more to come as storms fire up toward early evening.

The NWS Office, which was widely praised for the advanced notice it provided to Moore residents during that EF-5 tornado event, issued a steady stream of specific tornado outlook and safety information via its social media accounts on Friday. For example, on its Twitter account, the NWS warned: “Times may change, but I would not want to be driving anywhere in the OKC metro after 4 p.m. today. Tornadoes not certain, but be ready!” The agency was also issuing similar statements from other offices in the affected areas, such as Tulsa and St. Louis.

One of the reasons for forecasters' alarm in the region, in addition to the observational data pointing to a very unstable atmosphere, is that high-resolution computer models that can simulate weather conditions at a local level have consistently shown an outbreak of supercell thunderstorms taking place. These storms will likely pack large hail and potential tornadoes along with damaging straight-line winds. The Storm Prediction Center, in issuing the tornado watch in Oklahoma, stated:

”AN EXTREMELY UNSTABLE AIR MASS HAS DEVELOPED ACROSS MUCH OF CENTRAL/EASTERN OK THIS AFTERNOON. THIS WILL LIKELY RESULT IN RAPID DEVELOPMENT OF SEVERE THUNDERSTORMS THIS AFTERNOON AND EVENING ALONG THE DRYLINE OVER WEST-CENTRAL OK…AND ALONG A WEAK BOUNDARY EXTENDING NORTHEASTWARD INTO NORTHEAST OK. DISCRETE SUPERCELLS CAPABLE OF EXTREMELY LARGE HAIL AND DAMAGING TORNADOES ARE POSSIBLE. DAMAGING WINDS WILL BECOME AN INCREASING THREAT THROUGH THE EVENING.” 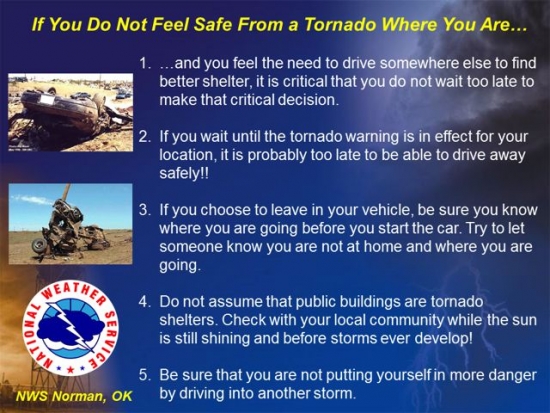 In addition to the tornado threat in Oklahoma, Kansas, Missouri and other areas, severe thunderstorms are also expected to affect areas well to the north and northeast, including Minneapolis, Chicago, Milwaukee, Detroit, and Des Moines. Many of these areas have seen copious amounts of rainfall and severe storms in recent days, leading to flash flooding and rising rivers and streams. The heavy rain from this next round of storms will only further aggravate the situation, and flooding is likely in some areas through early next week.

Resources for following the storms: