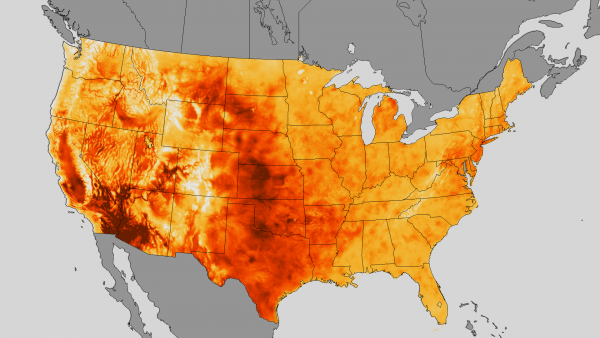 The heat wave that gripped the U.S. in mid-July had most of the country sweating bullets. Temperatures ratcheted up from coast to coast from July 10 to July 19 as the graphic above from the National Oceanic and Atmospheric Administration shows. During the period, 134 high temperature records fell or were tied.

Records were set indiscriminate of geographical location. Maynard, Mass., a suburb of Boston, set records on July 18 and 19 with a high of 99°F on both days. Areas around other big cities such as Denver and New York also saw record-high temperatures. Rural areas weren't exempt from sweltering heat. Cave Junction, Ore., topped out at 104°F on July 11 while Haiwee Reservoir, Calif., saw the mercury rise to an eye-popping 111°F on July 15.

Even in places where records weren’t set, high temperatures still ran well above average for this time of year. For example, during the period Salt Lake City was 5 degrees above its July average. The intense heat also caused New York state to break its all-time energy use in a single day on July 19.

Also of note is that while 134 record-high temperatures were recorded, 716 records for highest overnight minimum temperatures were also felled or tied. A cold front moved into the Northeast on Sunday, bringing relief to that region. However, areas west of the Mississippi will have to wait until later this week for relief from sizzling temperatures.