The tornado that struck El Reno, Okla., on May 31 was an EF-5 twister, the strongest on the Enhanced Fujita Scale, the National Weather Service reported on Tuesday. The tornado had a stunning width of 2.6 miles, which makes it the widest tornado on record worldwide. The twister killed 13, four of whom were storm chasers, including pioneering tornado researcher Tim Samaras.

The width of the tornado was equivalent to the entire north-south length of New York City's Central Park, which extends 2.5 miles from 59th street in Manhattan to 110th street. 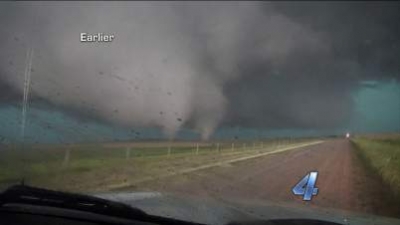 View of the El Reno tornado from KFOR-TV in Oklahoma City.
Credit: KFOR.com

The massive size, and the tornado's rapid expansion, plus damaging winds that rotating around the edges of the tornado all likely played a role in catching so many tornado chasers and motorists offguard.

The NWS had initially rated the tornado an EF-3 after viewing damage on the ground, but the upgrade was made after examining radar data from mobile Doppler radars that were in the field observing the tornado.

“The tornado has been upgraded to an EF-5 tornado based on velocity data from the research mobile radar from the University of Oklahoma RAX-POL Radar. In addition… the width of [the] tornado was measured by the mobile radar data to be 2.6 miles after the tornado passed east of U.S. Highway 81 south of El Reno.” 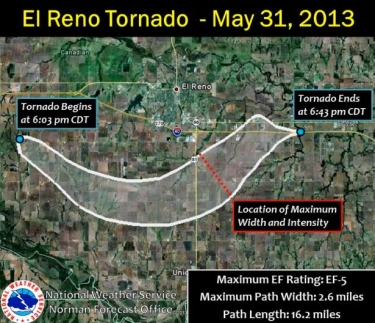 The path and width of the El Reno tornado.
Click on the image to enlarge.
Credit: NWS

“This width is the width of the tornado itself and does not include the damaging straight-line winds near the tornado as determined by the high-resolution mobile radar data. The 2.6 mile tornado path width is believed to be the widest tornado on record in the United States.”

The radars measured winds of close to 300 mph associated with the tornado, according to tornado researcher Howard Bluestein, quoted on the Washington Post's Capital Weather Gang blog.

The record width makes the tornado more than twice as wide as the devastating EF-5 tornado that struck Moore, Okla., on May 20, killing 24. According to the National Weather Service office in Norman, Okla., the 11 days from May 20 to May 31 was the shortest time span between EF-5 tornadoes in Oklahoma history.

The width of the tornado may explain why this tornado proved so deadly to tornado chasers, causing the first deaths ever recorded in more than three decades of storm chasing. 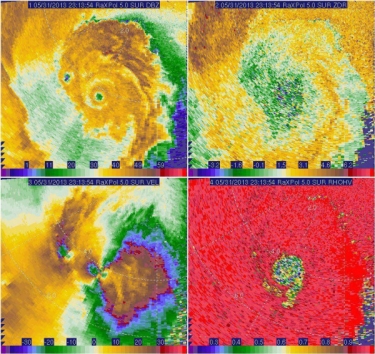 High-resolution radar imagery from the OU RaxPol mobile research radar, showing different aspects of the El Reno tornado. In the top left imag the main vortex is located in the center of the larger donut hole.
Click on the image to enlarge.
Credit: Twitter via @WunderAngela.

According to KFOR-TV in Oklahoma City, the previous record-holder was an EF-4 tornado that hit Wilber-Hallam, Neb., in May 2004. It had a maximum width of 2.4 miles.

The El Reno tornado killed Samaras, 55, his son Paul, 24, and chasing partner Carl Young, 45. A chasing crew from The Weather Channel was also struck by the tornado, with a chase vehicle carrying meteorologist Mike Bettes and two crew members tossed 200 yards off the road. One crew member suffered broken bones and required surgery.

Tornadoes are rated based on the damage they cause, but Doppler radar data can also be incorporated into the ratings, as was done in this case. This raises an interesting issue, though, regarding whether even wider tornadoes might have been missed during the early years of the historical tornado record, which extends back to the early 1950s, well before the Doppler radar era.