How Fujiwhara Effect Will Toss Hurricane Sandy Into U.S.

A vortex is a flow pattern in a fluid that has rotation about a center: water spiraling down the bathtub drain, the swirling eddies made by a canoe paddle, or a hurricane. 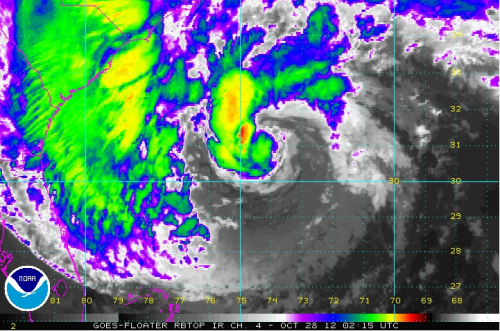 Infrared satellite image of Hurricane Sandy as it transitioned into a hybrid tropical/extratropical storm off the Carolinas on Oct. 27.
Credit: NOAA.

If two vortices come close enough to each other to get caught in each other’s flows, then each one acts like the cork; its center moves in the flow swirling around the other one. At the same time, if one is moving, the center about which the other is moving is itself moving, and vice versa, and the two carry out a joint maneuver. Or a dance. Hurricane Sandy is moving into position to do this dance with the upper-level trough whose eventual predicted merger with it has led to the “Frankenstorm” nickname.

How the dance goes depends on the two vortices’ directions of rotation and their relative strengths. If they are spinning opposite ways but are identical in every other way, they will move in parallel straight lines, perpendicular to the line through the two vortex centers. If they have the same spins, they will circle each other, both orbiting about their “center of mass” (if they are equal in strength, this is just the midpoint of the line between them). This do-si-do is known as the “Fujiwhara effect,” named after Sakuhei Fujiwhara, an early 20th century Japanese scientist who first explained it in meteorological literature.

Occasionally, two tropical cyclones get close enough to one another to do the Fujiwhara dance. It happens only rarely in the Atlantic. Computer models predict that Sandy is going to do it, not with another tropical cyclone, but with the vortex center associated with the larger extratropical storm. This dance move is going to be happening right at landfall. In fact, it is what’s going to bring Sandy ashore, leading to so much risk of flooding and even possibly wind damage inland.

Because the two vortices are neither equal in size or strength, nor simple in structure, they will merge partway through their first mutual orbit. The dance of courtship will end with hybridization, making the resulting storm either “perfect” or “Franken,” as you prefer.

NOTE: The movie above (via Weatherbell Models) shows temperature at 500 hPa (5-6 km above the surface) from a recent run of the GFS model. The period shown begins at 12 UTC on October 28 – early Sunday morning east coast US – and ends two days later at 12 UTC on Tuesday the 30th, with frames separated by 6 hours. Sandy, being a tropical system, is warm-cored, thus red, while the extratropical trough is cold-cored, and blue.

Those who wish to see the Fujiwhara effect in terms of the most natural variable —vorticity — can watch a short animation showing the geopotential height (contours), wind barbs, and vorticity (shading), from the same model for the same period. Vorticity is just what it sounds like:  it measures the spin or vortex-ness in the fluid. A vortex is just a compact blob with high vorticity.  The first frame sits still for a while so you can see the high vorticity region (reddish) associated with the extratropical trough, and the even higher vorticity region associated with Sandy. Images in the latter animation from Kyle Griffin.

Adam Sobel is a professor at Columbia University, in Earth and Environmental Sciences and Applied Physics and Applied Mathematics. He is an atmospheric scientist who specializes in the dynamics of climate and weather, particularly in the tropics, on time scales of days to decades. He is author or co-author of more than 85 peer-reviewed articles and has received the Meisinger Award from the American Meteorological Society and the Excellence in Mentoring Award from Lamont-Doherty Earth Observatory of Columbia University. He lives in New York with his wife and two sons.