In Seattle and Olympia, Wash., Sept. 28 was the wettest September day on record. In Seattle, 1.71 inches of rain fell, which was more rain than typically falls during the entire month. 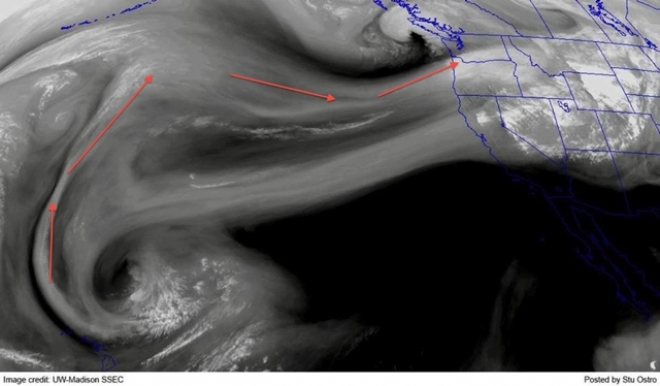 Water vapor satellite image showing the “atmospheric river” extending from near Hawaii in the lower left to the Pacific Northwest in the upper right. Arrows indicate the direction of moisture transport.
Credit: U. Wisc. via Facebook/Stu Ostro.

The rainfall was the product of a long, snake-like plume of moisture that stretched from near Hawaii to the gulf of Alaska, and it aimed squarely at the Pacific Northwest. These moisture plumes are sometimes called “atmospheric rivers,” which are responsible for some of the most damaging flooding events along the U.S. West Coast, particularly in California.

Some of the moisture originally came from Typhoon Pabok, which was in the western Pacific several days ago, according to the National Weather Service.

The highest rainfall totals were recorded in mountainous areas, with 5-10 inches or more of rainfall commonplace in the higher elevations of Oregon and Washington. Lees Camp, Ore., for example, recorded 11.10 inches of rain from Sept. 27-30, and Tillamook, along the north Oregon coast, received 6.84 inches.

A weather station on Mount St. Helens recorded 15.30 inches of rain during the same period.

The Portland metro area saw between 3-4 inches of rainfall, which is extremely rare for this time of year. Oregon wine country was also affected, with more than 3 inches of rain falling in three days.

While the Pacific Northwest sees its fair share of storms, it is typically quite dry during September, and the storm was sufficient to break numerous records.

In Portland, September 2013 is now the wettest such month on record, with 6.21 inches and counting at the downtown weather station, where records have been maintained since 1872. Typically, Portland receives just 1.47 inches of rain during the month.

Astoria, Ore., had received 10.51 inches of rain as of Monday morning, nearly 2 inches more than its previous mark set in September, 1906. Its normal monthly rainfall is just 2.14 inches.

Winds reached speeds of greater than 80 mph in higher elevations of Oregon and Washington, knocking down trees and power lines. Winds in Seattle and Portland, which are at lower elevations, were much lower. (Cliff Mass has a comprehensive rundown on the strong wind reports over at his weather blog.)

According to the National Oceanic and Atmospheric Administration (NOAA), up to half of the yearly precipitation along the West Coast comes in just a few atmospheric river events. A NOAA website on atmospheric rivers contains this fascinating statistic that illustrates just how much moisture can be transported by winds in the mid-to-upper atmosphere: “A strong atmospheric river transports an amount of water vapor roughly equivalent to 7.5-15 times the average flow of liquid water at the mouth of the Mississippi River.”

A study published earlier this year found that climate change may contribute to the growth of atmospheric rivers, increasing the threat of associated flooding.