A Tale of Two Coasts: The East Roasts While the West Shivers 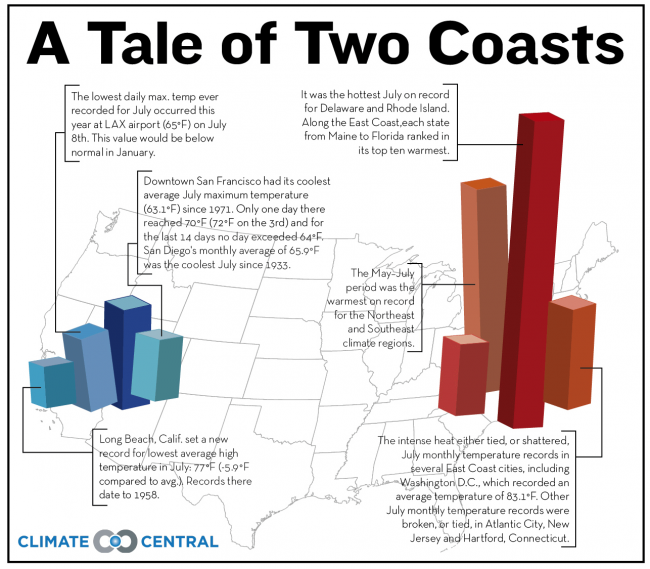 Comparison of early to mid-summer conditions along the eastern seaboard vs. the West Coast. The data in this graphic goes through the end of July. Click image to enlarge.
Credit: NOAA/NCDC; California State Climatology Office. Design by Russell Freedman.

People along the West Coast from Seattle to San Diego, who have shivered through an unusually cool summer, can be forgiven for being just a little bit jealous of residents of the East Coast, where warm temperature records have repeatedly been smashed this summer. During June, July and part of August as well, it seemed that many coastal areas of the West were missing out on summer entirely.

For example, whereas Washington, D.C. tied its record for the warmest month on record, with an average temperature of 83.1 degrees F in July, San Francisco, Calif. recorded its coolest average July maximum temperature since 1971. Only one day reached the 70 degree mark in San Francisco during July. The Climate Central infographic above shows some of the contrasting statistics from early to mid-summer. The data goes through the end of July, but in general the pattern of warmer weather in the East and cooler conditions along the West Coast has continued through much of August, with a few exceptions. For example, a heat wave briefly brought record warmth to the West Coast in mid-to-late August, but such heat was the exception there this summer.

Temperature departures from average during July, 2010. Note the cooler-than-average weather along the California coast. Credit: NOAA/NCDC.

The cool temperatures along parts of the West Coast may be related to the emergence of a La Nina event in the equatorial Pacific Ocean, which is characterized by cooler-than-average water temperatures. In addition, an area of cool waters persisted offshore of California, Oregon and Washington, and this may have contributed to the below average conditions as well. Persistent onshore winds blew cooler air into coastal California during July, according to the National Climatic Data Center. The cool water temperatures off the California coast, extending northward into the Gulf of Alaska, can be seen in the image below, along with the La Nina conditions along the equator.

Sea surface temperature anomalies from May 30, 2010 to August 28, 2010. Note the cool waters in the equatorial Pacific, related to La Nina. Cool water anomalies can also be found off California, Oregon, and Washington. Credit: NOAA/ESRL.